We at Insider Monkey have gone over 700 13F filings that hedge funds and prominent investors are required to file by the government. The 13F filings show the funds’ and investors’ portfolio positions as of June 30. In this article we look at what those investors think of Kimberly Clark Corp (NYSE:KMB).

Hedge fund ownership of Kimberly Clark Corp (NYSE:KMB) fell by 25% during the 9-month period ended June 30, as funds like Paul Tudor Jones’ Tudor Investment Corp and George Hall’s Clinton Group unloaded their KMB positions. Kimberly Clark Corp pays outs a reliable dividend that currently yields 3.84%, which landed the company in the top 10 on our countdown of the 25 Best Dividend Stocks for Retirement.

Today there are plenty of indicators investors can use to value their stock investments. Some of the best indicators are hedge fund and insider trading activity. We have shown that, historically, those who follow the best picks of the best money managers can outperform their index-focused peers by a very impressive margin (see the details here).

At Q3’s end, a total of 27 of the hedge funds tracked by Insider Monkey were long this stock, a 7% drop from the 1st quarter of 2018. The graph below displays the number of hedge funds with bullish positions in KMB over the last 6 quarters. With hedgies’ positions undergoing their usual ebb and flow, there exists an “upper tier” of notable hedge fund managers who were upping their stakes significantly (or already accumulated large positions). 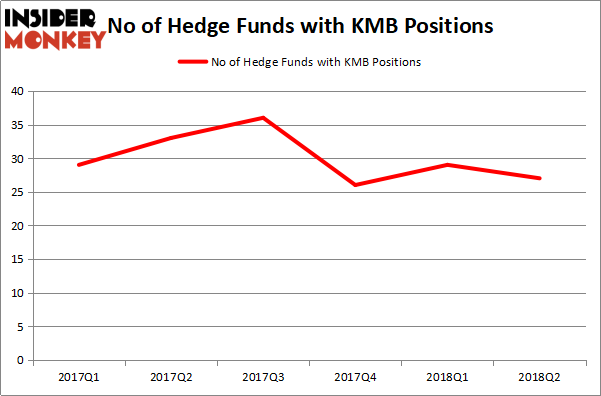 According to publicly available hedge fund and institutional investor holdings data compiled by Insider Monkey, Diamond Hill Capital, managed by Ric Dillon, holds the largest position in Kimberly Clark Corp (NYSE:KMB). Diamond Hill Capital has a $204.8 million position in the stock, comprising 1.1% of its 13F portfolio. Sitting at the No. 2 spot is Two Sigma Advisors, led by John Overdeck and David Siegel, holding a $135 million position; the fund has 0.4% of its 13F portfolio invested in the stock. Other members of the smart money with similar optimism comprise Anthony Scaramucci’s Skybridge Capital, Joel Greenblatt’s Gotham Asset Management and Panayotis Takis Sparaggis’ Alkeon Capital Management.

Since Kimberly Clark Corp (NYSE:KMB) has faced bearish sentiment from hedge fund managers, it’s safe to say that there lies a certain “tier” of hedge funds that slashed their full holdings last quarter. Interestingly, Greg Poole’s Echo Street Capital Management cut the largest position of the “upper crust” of funds monitored by Insider Monkey, valued at close to $7.6 million in call options, and Bruce Kovner’s Caxton Associates LP was right behind this move, as the fund dumped about $5.5 million worth. These bearish behaviors are important to note, as aggregate hedge fund interest fell by 2 funds last quarter.

As you can see these stocks had an average of 22 hedge funds with bullish positions and the average amount invested in these stocks was $562 million. That figure was $679 million in KMB’s case. HP Inc. (NYSE:HPQ) is the most popular stock in this table. On the other hand BCE Inc. (USA) (NYSE:BCE) is the least popular one with only 16 bullish hedge fund positions. Kimberly Clark Corp (NYSE:KMB) is not the most popular stock in this group but hedge fund interest is still above average. This is a slightly positive signal but we’d rather spend our time researching stocks that hedge funds are piling on, though we recommend dividend investors take a closer look at Kimberly Clark Corp (NYSE:KMB).