Investing in small-cap stocks has historically been a way to outperform the market, as small-cap companies typically grow faster on average than the blue chips. That outperformance comes with a price, however, as there are occasional periods of higher volatility. The time period since the end of the third quarter is one of those periods, as the Russell 2000 ETF (IWM) has underperformed the larger S&P 500 ETF (SPY) by about 4 percentage points. Given that the funds we track tend to have a disproportionate amount of their portfolios in smaller cap stocks, they have seen some volatility in their portfolios too. Actually their moves are potentially one of the factors that contributed to this volatility. In this article, we use our extensive database of hedge fund holdings to find out what the smart money thinks of Huntington Bancshares Incorporated (NASDAQ:HBAN).

Huntington Bancshares Incorporated (NASDAQ:HBAN) was in 26 hedge funds’ portfolios at the end of June, down from 33 at the end of March. Breogan Vazquez’s Breogan Capital sold out of its Huntington position during Q2, while Adage Capital, managed by Phill Gross and Robert Atchinson grew more bullish, hiking its stake by 93% to 2.45 million shares. While some hedge funds were selling off Huntington Bancshares in Q2, it’s been a different case with insiders in Q4. Huntington Bancshares landed on our countdown of The 25 Biggest Insider Purchases in October after President, CEO & Chairman Stephen D. Steinour bought over $100,000 worth of his company’s shares on October 25. That was the leading executive’s first insider purchase in 18 months. 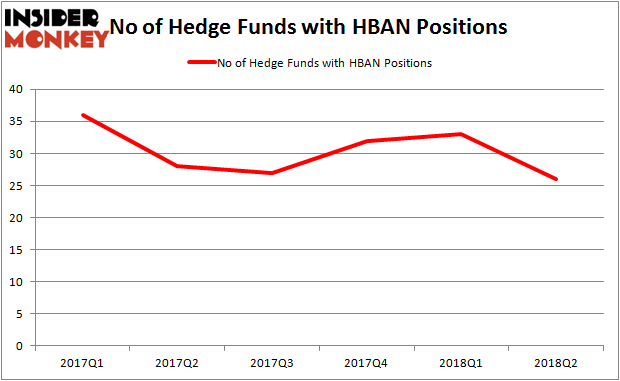 According to Insider Monkey’s hedge fund database, Phill Gross and Robert Atchinson’s Adage Capital Management has the largest position in Huntington Bancshares Incorporated (NASDAQ:HBAN), worth close to $36.2 million, accounting for 0.1% of its total 13F portfolio. Sitting at the No. 2 spot is Stelliam Investment Management, managed by Ross Margolies, which holds a $32.6 million position; 1.5% of its 13F portfolio is allocated to the company. Other professional money managers that are bullish encompass Matthew Iorio’s White Elm Capital, Thomas G. Maheras’ Tegean Capital Management and Fred Cummings’ Elizabeth Park Capital Management.

Seeing as Huntington Bancshares Incorporated (NASDAQ:HBAN) has experienced declining sentiment from the entirety of the hedge funds we track, it’s easy to see that there was a specific group of money managers that decided to sell off their entire stakes last quarter. Intriguingly, Malcolm Fairbairn’s Ascend Capital sold off the biggest stake of the “upper crust” of funds followed by Insider Monkey, valued at about $4.7 million in stock. Nick Niell’s fund, Arrowgrass Capital Partners, also cut its stock, about $2.3 million worth. These moves are intriguing to say the least, as total hedge fund interest dropped by 7 funds last quarter.

As you can see these stocks had an average of 25 hedge funds with bullish positions and the average amount invested in these stocks was $2.38 billion. That figure was $251 million in HBAN’s case. Cheniere Energy, Inc. (NYSEAMEX:LNG) is the most popular stock in this table. On the other hand Nomura Holdings, Inc. (ADR) (NYSE:NMR) is the least popular one with only 4 bullish hedge fund positions. Huntington Bancshares Incorporated (NASDAQ:HBAN) is not the most popular stock in this group but hedge fund interest is still above average. This is a slightly positive signal, as is the insider buying, but we’d rather spend our time researching stocks that hedge funds are piling on. In this regard LNG might be a better candidate to consider a long position.