Is Hollysys Automation Technologies Ltd (NASDAQ:HOLI) a good equity to bet on right now? We like to check what the smart money thinks first before doing extensive research on a given stock. Although there have been several high profile failed hedge fund picks, the consensus picks among hedge fund investors have historically outperformed the market after adjusting for known risk attributes. It’s not surprising given that hedge funds have access to better information and more resources to predict the winners in the stock market.

Is Hollysys Automation Technologies Ltd (NASDAQ:HOLI) worth your attention right now? Investors who are in the know are selling. The number of bullish hedge fund positions retreated by 1 in recent months. Our calculations also showed that HOLI isn’t among the 30 most popular stocks among hedge funds (see the video below). HOLI was in 13 hedge funds’ portfolios at the end of the second quarter of 2019. There were 14 hedge funds in our database with HOLI holdings at the end of the previous quarter.

In the eyes of most stock holders, hedge funds are seen as underperforming, outdated investment tools of the past. While there are more than 8000 funds trading at the moment, Our experts choose to focus on the aristocrats of this club, approximately 750 funds. Most estimates calculate that this group of people handle bulk of all hedge funds’ total capital, and by tailing their inimitable equity investments, Insider Monkey has spotted numerous investment strategies that have historically outperformed the market. Insider Monkey’s flagship hedge fund strategy defeated the S&P 500 index by around 5 percentage points annually since its inception in May 2014. We were able to generate large returns even by identifying short candidates. Our portfolio of short stocks lost 25.7% since February 2017 (through September 30th) even though the market was up more than 33% during the same period. We just shared a list of 10 short targets in our latest quarterly update .

How have hedgies been trading Hollysys Automation Technologies Ltd (NASDAQ:HOLI)?

At Q2’s end, a total of 13 of the hedge funds tracked by Insider Monkey were long this stock, a change of -7% from one quarter earlier. Below, you can check out the change in hedge fund sentiment towards HOLI over the last 16 quarters. With the smart money’s sentiment swirling, there exists a few notable hedge fund managers who were boosting their stakes meaningfully (or already accumulated large positions). 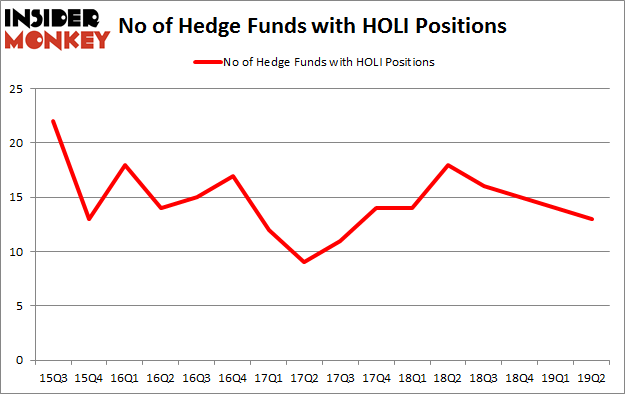 According to publicly available hedge fund and institutional investor holdings data compiled by Insider Monkey, Impax Asset Management, managed by Ian Simm, holds the number one position in Hollysys Automation Technologies Ltd (NASDAQ:HOLI). Impax Asset Management has a $39.8 million position in the stock, comprising 0.5% of its 13F portfolio. Sitting at the No. 2 spot is Renaissance Technologies holding a $7.9 million position; the fund has less than 0.1%% of its 13F portfolio invested in the stock. Some other members of the smart money that hold long positions include Seth Fischer’s Oasis Management, John Overdeck and David Siegel’s Two Sigma Advisors and Israel Englander’s Millennium Management.

Due to the fact that Hollysys Automation Technologies Ltd (NASDAQ:HOLI) has faced a decline in interest from hedge fund managers, it’s easy to see that there lies a certain “tier” of hedge funds who sold off their positions entirely heading into Q3. Interestingly, Jeffrey Talpins’s Element Capital Management said goodbye to the largest stake of the “upper crust” of funds monitored by Insider Monkey, totaling an estimated $0.2 million in stock. Andrew Feldstein and Stephen Siderow’s fund, Blue Mountain Capital, also dropped its stock, about $0.1 million worth. These moves are intriguing to say the least, as aggregate hedge fund interest fell by 1 funds heading into Q3.

As you can see these stocks had an average of 16.25 hedge funds with bullish positions and the average amount invested in these stocks was $171 million. That figure was $69 million in HOLI’s case. Orchard Therapeutics plc (NASDAQ:ORTX) is the most popular stock in this table. On the other hand New York Mortgage Trust, Inc. (NASDAQ:NYMT) is the least popular one with only 10 bullish hedge fund positions. Hollysys Automation Technologies Ltd (NASDAQ:HOLI) is not the least popular stock in this group but hedge fund interest is still below average. This is a slightly negative signal and we’d rather spend our time researching stocks that hedge funds are piling on. Our calculations showed that top 20 most popular stocks among hedge funds returned 24.4% in 2019 through September 30th and outperformed the S&P 500 ETF (SPY) by 4 percentage points. Unfortunately HOLI wasn’t nearly as popular as these 20 stocks (hedge fund sentiment was quite bearish); HOLI investors were disappointed as the stock returned -20.1% during the third quarter and underperformed the market. If you are interested in investing in large cap stocks with huge upside potential, you should check out the top 20 most popular stocks among hedge funds as many of these stocks already outperformed the market so far in 2019.