It was a rough fourth quarter for many hedge funds, which were naturally unable to overcome the big dip in the broad market, as the S&P 500 fell by about 4.8% during 2018 and average hedge fund losing about 1%. The Russell 2000, composed of smaller companies, performed even worse, trailing the S&P by more than 6 percentage points, as investors fled less-known quantities for safe havens. Luckily hedge funds were shifting their holdings into large-cap stocks. The 20 most popular hedge fund stocks actually generated an average return of 24.4% during the first 9 months of 2019 and outperformed the S&P 500 ETF by 4 percentage points. We are done processing the latest 13f filings and in this article we will study how hedge fund sentiment towards Genfit SA (NASDAQ:GNFT) changed during the first quarter.

Is Genfit SA (NASDAQ:GNFT) undervalued? Prominent investors are getting less bullish. The number of bullish hedge fund bets fell by 4 in recent months. Our calculations also showed that GNFT isn’t among the 30 most popular stocks among hedge funds (see the video below).

In addition to following the biggest hedge funds for investment ideas, we also share stock pitches from conferences, investor letters and other sources  like this one where the fund manager is talking about two under the radar 1000% return potential stocks: first one in internet infrastructure and the second in the heart of advertising market. We use hedge fund buy/sell signals to determine whether to conduct in-depth analysis of these stock ideas which take days. Let’s take a gander at the recent hedge fund action surrounding Genfit SA (NASDAQ:GNFT).

What does smart money think about Genfit SA (NASDAQ:GNFT)? 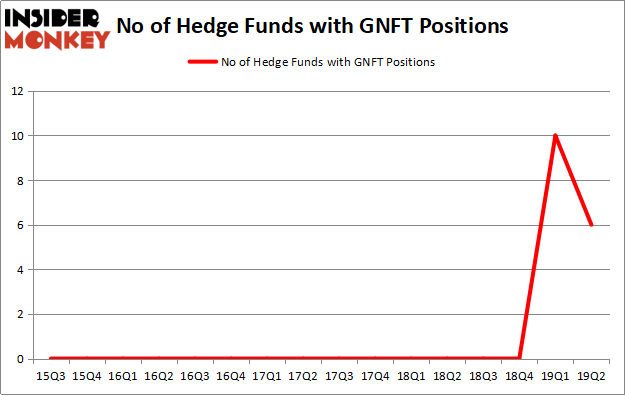 According to publicly available hedge fund and institutional investor holdings data compiled by Insider Monkey, Samuel Isaly’s OrbiMed Advisors has the biggest position in Genfit SA (NASDAQ:GNFT), worth close to $22.2 million, amounting to 0.3% of its total 13F portfolio. The second largest stake is held by Great Point Partners, managed by Jeffrey Jay and David Kroin, which holds a $13.7 million position; the fund has 1.5% of its 13F portfolio invested in the stock. Some other peers with similar optimism encompass Bihua Chen’s Cormorant Asset Management, Israel Englander’s Millennium Management and Dmitry Balyasny’s Balyasny Asset Management.

Due to the fact that Genfit SA (NASDAQ:GNFT) has witnessed falling interest from the entirety of the hedge funds we track, it’s easy to see that there lies a certain “tier” of funds that decided to sell off their entire stakes by the end of the second quarter. It’s worth mentioning that Arthur B Cohen and Joseph Healey’s Healthcor Management LP sold off the biggest investment of the “upper crust” of funds followed by Insider Monkey, worth an estimated $7.8 million in stock. Glenn Russell Dubin’s fund, Highbridge Capital Management, also dumped its stock, about $3.7 million worth. These bearish behaviors are interesting, as total hedge fund interest was cut by 4 funds by the end of the second quarter.

As you can see these stocks had an average of 15.75 hedge funds with bullish positions and the average amount invested in these stocks was $135 million. That figure was $46 million in GNFT’s case. C&J Energy Services, Inc (NYSE:CJ) is the most popular stock in this table. On the other hand Opus Bank (NASDAQ:OPB) is the least popular one with only 9 bullish hedge fund positions. Compared to these stocks Genfit SA (NASDAQ:GNFT) is even less popular than OPB. Hedge funds dodged a bullet by taking a bearish stance towards GNFT. Our calculations showed that the top 20 most popular hedge fund stocks returned 24.4% in 2019 through September 30th and outperformed the S&P 500 ETF (SPY) by 4 percentage points. Unfortunately GNFT wasn’t nearly as popular as these 20 stocks (hedge fund sentiment was very bearish); GNFT investors were disappointed as the stock returned -11.8% during the third quarter and underperformed the market. If you are interested in investing in large cap stocks with huge upside potential, you should check out the top 20 most popular stocks among hedge funds as many of these stocks already outperformed the market so far in 2019.