Is Franklin Resources, Inc. (NYSE:BEN) ready to rally soon? Money managers are taking a pessimistic view. The number of long hedge fund bets went down by 4 in recent months. Our calculations also showed that ben isn’t among the 30 most popular stocks among hedge funds.

Heading into the fourth quarter of 2018, a total of 29 of the hedge funds tracked by Insider Monkey held long positions in this stock, a change of -12% from the second quarter of 2018. Below, you can check out the change in hedge fund sentiment towards BEN over the last 13 quarters. With hedge funds’ positions undergoing their usual ebb and flow, there exists a select group of notable hedge fund managers who were adding to their holdings substantially (or already accumulated large positions). 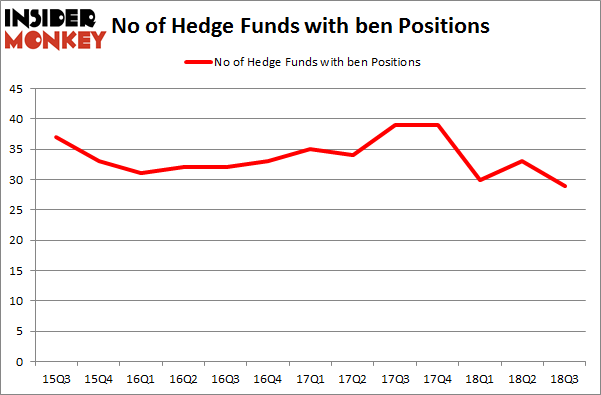 The largest stake in Franklin Resources, Inc. (NYSE:BEN) was held by Abrams Capital Management, which reported holding $302.4 million worth of stock at the end of September. It was followed by Pzena Investment Management with a $272.5 million position. Other investors bullish on the company included Highfields Capital Management, Diamond Hill Capital, and Renaissance Technologies.

Because Franklin Resources, Inc. (NYSE:BEN) has witnessed declining sentiment from the smart money, it’s safe to say that there were a few hedgies who sold off their entire stakes last quarter. At the top of the heap, Mason Hawkins’s Southeastern Asset Management cut the biggest position of the 700 funds followed by Insider Monkey, valued at an estimated $50.2 million in stock, and Robert Joseph Caruso’s Select Equity Group was right behind this move, as the fund dumped about $27.1 million worth. These bearish behaviors are interesting, as total hedge fund interest fell by 4 funds last quarter.

As you can see these stocks had an average of 33.25 hedge funds with bullish positions and the average amount invested in these stocks was $1310 million. That figure was $878 million in BEN’s case. D.R. Horton, Inc. (NYSE:DHI) is the most popular stock in this table. On the other hand American Water Works Company, Inc. (NYSE:AWK) is the least popular one with only 20 bullish hedge fund positions. Franklin Resources, Inc. (NYSE:BEN) is not the least popular stock in this group but hedge fund interest is still below average. This is a slightly negative signal and we’d rather spend our time researching stocks that hedge funds are piling on. In this regard DHI might be a better candidate to consider a long position.