Insider Monkey has processed numerous 13F filings of hedge funds and successful value investors to create an extensive database of hedge fund holdings. The 13F filings show the hedge funds’ and successful investors’ positions as of the end of the second quarter. You can find write-ups about an individual hedge fund’s trades on numerous financial news websites. However, in this article we will take a look at their collective moves and analyze what the smart money thinks of Community Trust Bancorp, Inc. (NASDAQ:CTBI) based on that data.

Community Trust Bancorp, Inc. (NASDAQ:CTBI) investors should be aware of a decrease in activity from the world’s largest hedge funds of late. Our calculations also showed that CTBI isn’t among the 30 most popular stocks among hedge funds (see the video below).

At the end of the second quarter, a total of 6 of the hedge funds tracked by Insider Monkey were long this stock, a change of -25% from one quarter earlier. Below, you can check out the change in hedge fund sentiment towards CTBI over the last 16 quarters. With the smart money’s sentiment swirling, there exists a select group of notable hedge fund managers who were upping their stakes meaningfully (or already accumulated large positions). 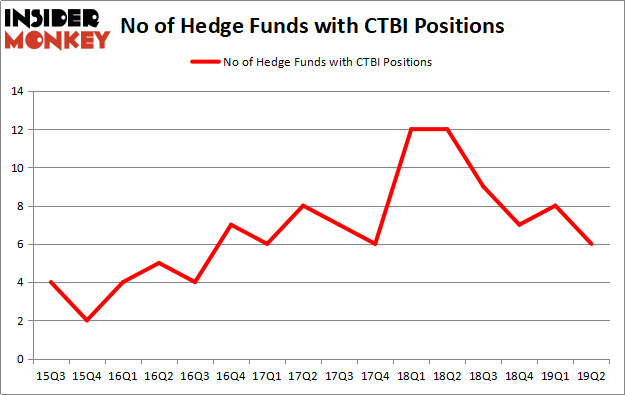 Of the funds tracked by Insider Monkey, Renaissance Technologies has the number one position in Community Trust Bancorp, Inc. (NASDAQ:CTBI), worth close to $14 million, accounting for less than 0.1%% of its total 13F portfolio. On Renaissance Technologies’s heels is AQR Capital Management, managed by Cliff Asness, which holds a $2.8 million position; the fund has less than 0.1%% of its 13F portfolio invested in the stock. Some other peers that hold long positions consist of Israel Englander’s Millennium Management, John Overdeck and David Siegel’s Two Sigma Advisors and D. E. Shaw’s D E Shaw.

Judging by the fact that Community Trust Bancorp, Inc. (NASDAQ:CTBI) has faced declining sentiment from the entirety of the hedge funds we track, logic holds that there lies a certain “tier” of funds that decided to sell off their full holdings by the end of the second quarter. Intriguingly, Michael Platt and William Reeves’s BlueCrest Capital Mgmt. sold off the largest position of the 750 funds monitored by Insider Monkey, totaling an estimated $0.2 million in stock. Chuck Royce’s fund, Royce & Associates, also said goodbye to its stock, about $0 million worth. These transactions are interesting, as aggregate hedge fund interest dropped by 2 funds by the end of the second quarter.

As you can see these stocks had an average of 10.5 hedge funds with bullish positions and the average amount invested in these stocks was $47 million. That figure was $20 million in CTBI’s case. Virtus Investment Partners Inc (NASDAQ:VRTS) is the most popular stock in this table. On the other hand Y-mAbs Therapeutics, Inc. (NASDAQ:YMAB) is the least popular one with only 7 bullish hedge fund positions. Compared to these stocks Community Trust Bancorp, Inc. (NASDAQ:CTBI) is even less popular than YMAB. Hedge funds dodged a bullet by taking a bearish stance towards CTBI. Our calculations showed that the top 20 most popular hedge fund stocks returned 24.4% in 2019 through September 30th and outperformed the S&P 500 ETF (SPY) by 4 percentage points. Unfortunately CTBI wasn’t nearly as popular as these 20 stocks (hedge fund sentiment was very bearish); CTBI investors were disappointed as the stock returned 1.6% during the third quarter and underperformed the market. If you are interested in investing in large cap stocks with huge upside potential, you should check out the top 20 most popular stocks among hedge funds as many of these stocks already outperformed the market so far in 2019.