It seems that the masses and most of the financial media hate hedge funds and what they do, but why is this hatred of hedge funds so prominent? At the end of the day, these asset management firms do not gamble the hard-earned money of the people who are on the edge of poverty. Truth be told, most hedge fund managers and other smaller players within this industry are very smart and skilled investors. Of course, they may also make wrong bets in some instances, but no one knows what the future holds and how market participants will react to the bountiful news that floods in each day. The Standard and Poor’s 500 Index returned approximately 5.7% in the 12 months ending October 26 (including dividend payments). Conversely, hedge funds’ 30 preferred S&P 500 stocks (as of June 2018) generated a return of 15.1% during the same 12-month period, with 53% of these stock picks outperforming the broader market benchmark. Coincidence? It might happen to be so, but it is unlikely. Our research covering the last 18 years indicates that hedge funds’ stock picks generate superior risk-adjusted returns. That’s why we believe it isn’t a waste of time to check out hedge fund sentiment before you invest in a stock like Alnylam Pharmaceuticals, Inc. (NASDAQ:ALNY).

Alnylam Pharmaceuticals, Inc. (NASDAQ:ALNY) investors should be aware of a decrease in activity from the world’s largest hedge funds of late. ALNY was in 32 hedge funds’ portfolios at the end of September. There were 35 hedge funds in our database with ALNY positions at the end of the previous quarter. Our calculations also showed that ALNY isn’t among the 30 most popular stocks among hedge funds.

In today’s marketplace there are many formulas stock market investors put to use to assess publicly traded companies. A pair of the most innovative formulas are hedge fund and insider trading signals. Our experts have shown that, historically, those who follow the best picks of the elite hedge fund managers can outpace the broader indices by a significant amount (see the details here). 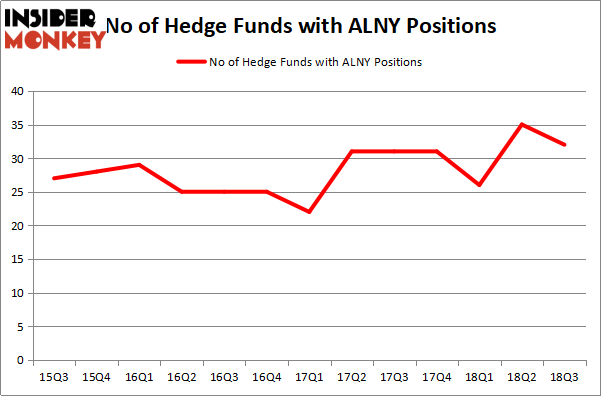 The largest stake in Alnylam Pharmaceuticals, Inc. (NASDAQ:ALNY) was held by Maverick Capital, which reported holding $132.3 million worth of stock at the end of September. It was followed by Perceptive Advisors with a $104.8 million position. Other investors bullish on the company included Point72 Asset Management, 12 West Capital Management, and Bridger Management.

Seeing as Alnylam Pharmaceuticals, Inc. (NASDAQ:ALNY) has faced a decline in interest from the entirety of the hedge funds we track, logic holds that there is a sect of hedge funds who sold off their full holdings heading into Q3. It’s worth mentioning that Samuel Isaly’s OrbiMed Advisors said goodbye to the largest stake of the “upper crust” of funds monitored by Insider Monkey, comprising about $124.7 million in stock. Behzad Aghazadeh’s fund, venBio Select Advisor, also dumped its stock, about $69 million worth. These moves are interesting, as aggregate hedge fund interest dropped by 3 funds heading into Q3.

View table here if you experience formatting issues.
As you can see these stocks had an average of 22.75 hedge funds with bullish positions and the average amount invested in these stocks was $496.31 billion. That figure was $728 million in ALNY’s case. East West Bancorp, Inc. (NASDAQ:EWBC) is the most popular stock in this table. On the other hand The Interpublic Group of Companies Inc (NYSE:IPG) is the least popular one with only 16 bullish hedge fund positions. Compared to these stocks Alnylam Pharmaceuticals, Inc. (NASDAQ:ALNY) is more popular among hedge funds. Considering that hedge funds are fond of this stock in relation to its market cap peers, it may be a good idea to analyze it in detail and potentially include it in your portfolio.