Hedge funds are not perfect. They have their bad picks just like everyone else. Facebook, a stock hedge funds have loved dearly, lost nearly 40% of its value at one point in 2018. Although hedge funds are not perfect, their consensus picks do deliver solid returns, however. Our data show the top 20 S&P 500 stocks among hedge funds beat the S&P 500 Index by nearly 10 percentage points so far in 2019. Because hedge funds have a lot of resources and their consensus picks do well, we pay attention to what they think. In this article, we analyze what the elite funds think of WEC Energy Group, Inc. (NYSE:WEC).

WEC Energy Group, Inc. (NYSE:WEC) investors should be aware of an increase in hedge fund sentiment recently. Our calculations also showed that WEC isn’t among the 30 most popular stocks among hedge funds (click for Q3 rankings and see the video below for Q2 rankings).

In the financial world there are a lot of indicators stock traders can use to evaluate publicly traded companies. Some of the best indicators are hedge fund and insider trading moves. Our researchers have shown that, historically, those who follow the top picks of the best fund managers can outpace their index-focused peers by a solid margin (see the details here).

Unlike the largest US hedge funds that are convinced Dow will soar past 40,000 or the world’s most bearish hedge fund that’s more convinced than ever that a crash is coming, our long-short investment strategy doesn’t rely on bull or bear markets to deliver double digit returns. We only rely on the best performing hedge funds‘ buy/sell signals. Let’s take a look at the recent hedge fund action regarding WEC Energy Group, Inc. (NYSE:WEC).

At the end of the third quarter, a total of 19 of the hedge funds tracked by Insider Monkey were bullish on this stock, a change of 46% from one quarter earlier. On the other hand, there were a total of 19 hedge funds with a bullish position in WEC a year ago. With hedgies’ positions undergoing their usual ebb and flow, there exists an “upper tier” of notable hedge fund managers who were boosting their holdings meaningfully (or already accumulated large positions). 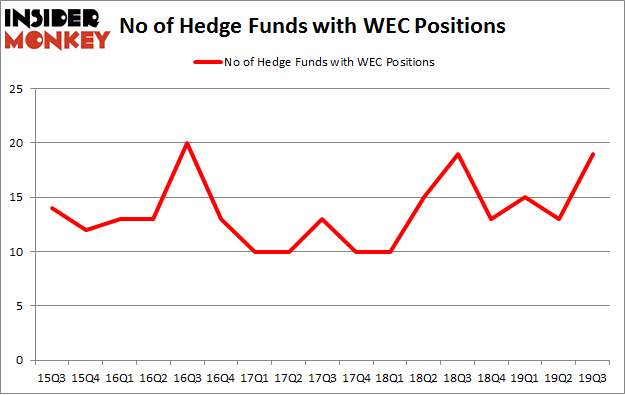 Among these funds, Renaissance Technologies held the most valuable stake in WEC Energy Group, Inc. (NYSE:WEC), which was worth $229.7 million at the end of the third quarter. On the second spot was AQR Capital Management which amassed $72.4 million worth of shares. GLG Partners, D E Shaw, and Balyasny Asset Management were also very fond of the stock, becoming one of the largest hedge fund holders of the company. In terms of the portfolio weights assigned to each position CSat Investment Advisory allocated the biggest weight to WEC Energy Group, Inc. (NYSE:WEC), around 0.2% of its 13F portfolio. Renaissance Technologies is also relatively very bullish on the stock, designating 0.19 percent of its 13F equity portfolio to WEC.

As industrywide interest jumped, key money managers were leading the bulls’ herd. Citadel Investment Group, managed by Ken Griffin, assembled the largest position in WEC Energy Group, Inc. (NYSE:WEC). Citadel Investment Group had $8.9 million invested in the company at the end of the quarter. David E. Shaw’s D E Shaw also made a $2.5 million investment in the stock during the quarter. The other funds with new positions in the stock are John Overdeck and David Siegel’s Two Sigma Advisors, Mike Vranos’s Ellington, and Ben Levine, Andrew Manuel and Stefan Renold’s LMR Partners.

As you can see these stocks had an average of 22.25 hedge funds with bullish positions and the average amount invested in these stocks was $631 million. That figure was $384 million in WEC’s case. Ingersoll-Rand Plc (NYSE:IR) is the most popular stock in this table. On the other hand Perusahaan Perseroan (Persero) PT Telekomunikasi Indonesia Tbk (NYSE:TLK) is the least popular one with only 7 bullish hedge fund positions. WEC Energy Group, Inc. (NYSE:WEC) is not the least popular stock in this group but hedge fund interest is still below average. This is a slightly negative signal and we’d rather spend our time researching stocks that hedge funds are piling on. Our calculations showed that top 20 most popular stocks among hedge funds returned 37.4% in 2019 through the end of November and outperformed the S&P 500 ETF (SPY) by 9.9 percentage points. Unfortunately WEC wasn’t nearly as popular as these 20 stocks (hedge fund sentiment was quite bearish); WEC investors were disappointed as the stock returned -6.1% during the first two months of the fourth quarter and underperformed the market. If you are interested in investing in large cap stocks with huge upside potential, you should check out the top 20 most popular stocks among hedge funds as 70 percent of these stocks already outperformed the market in Q4.