Insider Monkey finished processing more than 700 13F filings made by hedge funds and prominent investors. These filings show these funds’ portfolio positions as of September 30th. What do these smart investors think about Verso Corporation (NYSE:VRS)?

Is Verso Corporation (NYSE:VRS) a bargain? Investors who are in the know are in an optimistic mood. The number of long hedge fund bets inched up by 8 in recent months. Our calculations also showed that vrs isn’t among the 30 most popular stocks among hedge funds.

What does the smart money think about Verso Corporation (NYSE:VRS)?

At Q3’s end, a total of 22 of the hedge funds tracked by Insider Monkey were bullish on this stock, a change of 57% from one quarter earlier. The graph below displays the number of hedge funds with bullish position in VRS over the last 13 quarters. With the smart money’s capital changing hands, there exists a few notable hedge fund managers who were increasing their stakes substantially (or already accumulated large positions). 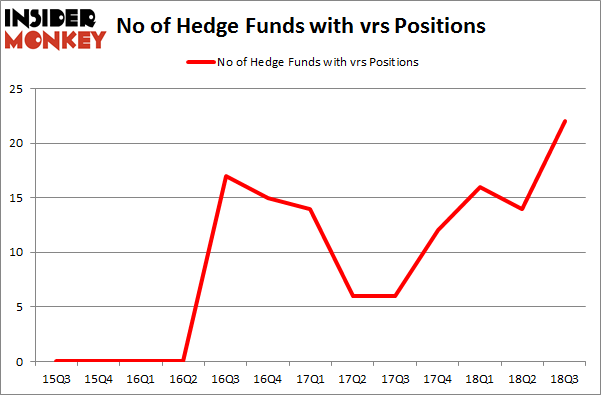 Now, some big names were leading the bulls’ herd. Arrowstreet Capital, managed by Peter Rathjens, Bruce Clarke and John Campbell, assembled the most valuable position in Verso Corporation (NYSE:VRS). Arrowstreet Capital had $12.1 million invested in the company at the end of the quarter. Jim Simons’s Renaissance Technologies also made a $8.9 million investment in the stock during the quarter. The other funds with new positions in the stock are Steve Cohen’s Point72 Asset Management, Benjamin A. Smith’s Laurion Capital Management, and David Costen Haley’s HBK Investments.

Let’s check out hedge fund activity in other stocks – not necessarily in the same industry as Verso Corporation (NYSE:VRS) but similarly valued. We will take a look at Boston Private Financial Hldg Inc (NASDAQ:BPFH), Fang Holdings Limited (NYSE:SFUN), Fossil Group Inc (NASDAQ:FOSL), and Getty Realty Corp. (NYSE:GTY). All of these stocks’ market caps are similar to VRS’s market cap.

As you can see these stocks had an average of 10.5 hedge funds with bullish positions and the average amount invested in these stocks was $68 million. That figure was $204 million in VRS’s case. Fossil Group Inc (NASDAQ:FOSL) is the most popular stock in this table. On the other hand SouFun Holdings Limited (NYSE:SFUN) is the least popular one with only 7 bullish hedge fund positions. Compared to these stocks Verso Corporation (NYSE:VRS) is more popular among hedge funds. Considering that hedge funds are fond of this stock in relation to its market cap peers, it may be a good idea to analyze it in detail and potentially include it in your portfolio.