Is The Williams Companies, Inc. (WMB) A Good Stock To Buy According To Hedgies?

Our extensive research has shown that imitating the smart money can generate significant returns for retail investors, which is why we track more than 700 prominent money managers and analyze their quarterly 13F filings. The stocks that are heavily bought by hedge funds historically outperformed the market, though there is no shortage of high profile failures like hedge funds’ recent losses in Facebook. Let’s take a closer look at what the funds we track think about The Williams Companies, Inc. (NYSE:WMB) in this article.

The Williams Companies, Inc. (NYSE:WMB) witnessed an increase in hedge fund sentiment in Q3, though it remains well removed from being one of the most popular energy stocks like it was three years ago, let alone one of the 30 Most Popular Stocks Among Hedge Funds. It did rank 4th on our list of the 20 Dividend Stocks That Billionaires Are Piling On, with the stock currently carrying a solid 5.56% dividend yield.

What have hedge funds been doing with The Williams Companies, Inc. (NYSE:WMB)?

At the end of the third quarter, a total of 43 of the hedge funds tracked by Insider Monkey were bullish on this stock, a rise of 8% from the previous quarter. Below, you can check out the change in hedge fund sentiment towards WMB over the last 13 quarters. So, let’s find out which hedge funds were among the top holders of the stock and which hedge funds were making big moves. 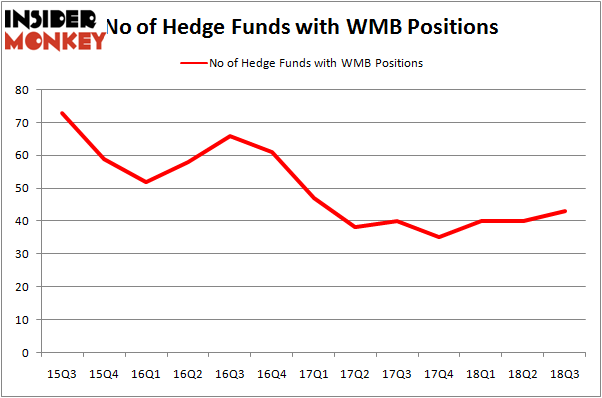 The largest stake in The Williams Companies, Inc. (NYSE:WMB) was held by King Street Capital, which reported holding $406.5 million worth of stock as of the end of September. It was followed by Glenview Capital with a $232.7 million position. Other investors bullish on the company included Steadfast Capital Management, Canyon Capital Advisors, and Millennium Management.

Let’s go over hedge fund activity in other stocks – not necessarily in the same industry as The Williams Companies, Inc. (NYSE:WMB) but similarly valued. We will take a look at eBay Inc (NASDAQ:EBAY), Spotify Technology S.A. (NYSE:SPOT), Johnson Controls International plc (NYSE:JCI), and Monster Beverage Corp (NASDAQ:MNST). This group of stocks’ market valuations are similar to WMB’s market valuation.

As you can see these stocks had an average of 40 hedge funds with bullish positions and the average amount invested in these stocks was $2.34 billion. That figure was $1.84 billion in WMB’s case. Spotify Technology S.A. (NYSE:SPOT) is the most popular stock in this table. On the other hand Johnson Controls International plc (NYSE:JCI) is the least popular one with only 16 bullish hedge fund positions. The Williams Companies, Inc. (NYSE:WMB) is not the most popular stock in this group but hedge fund interest is still above average. This is a slightly positive signal but we’d rather spend our time researching stocks that hedge funds are piling on, like Spotify.