Is Rosehill Resources Inc. (NASDAQ:ROSE) a cheap investment today? Money managers are taking an optimistic view. The number of bullish hedge fund bets improved by 11 lately. Our calculations also showed that ROSE isn’t among the 30 most popular stocks among hedge funds. ROSE was in 14 hedge funds’ portfolios at the end of September. There were 3 hedge funds in our database with ROSE positions at the end of the previous quarter.

What does the smart money think about Rosehill Resources Inc. (NASDAQ:ROSE)? 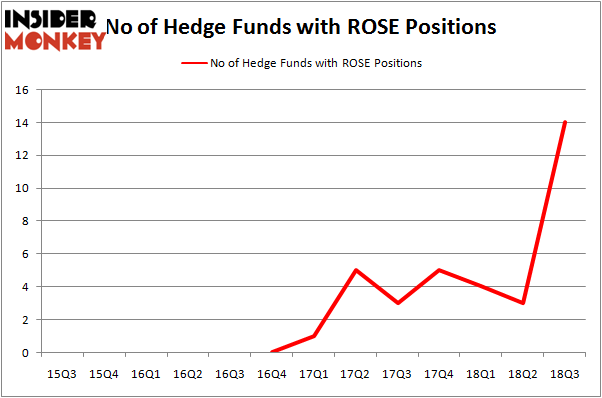 According to Insider Monkey’s hedge fund database, Anchorage Advisors, managed by Kevin Michael Ulrich and Anthony Davis, holds the number one position in Rosehill Resources Inc. (NASDAQ:ROSE). Anchorage Advisors has a $3.7 million position in the stock, comprising less than 0.1% of its 13F portfolio. The second most bullish fund manager is Scott Bessent of Key Square Capital Management, with a $3.1 million position; 0.7% of its 13F portfolio is allocated to the stock. Remaining peers that are bullish encompass Kevin Michael Ulrich and Anthony Davis’s Anchorage Advisors, Jonathan Barrett and Paul Segal’s Luminus Management and Anand Parekh’s Alyeska Investment Group.

As you can see these stocks had an average of 11.75 hedge funds with bullish positions and the average amount invested in these stocks was $52 million. That figure was $22 million in ROSE’s case. Hornbeck Offshore Services, Inc. (NYSE:HOS) is the most popular stock in this table. On the other hand Universal Stainless & Alloy Products (NASDAQ:USAP) is the least popular one with only 7 bullish hedge fund positions. Rosehill Resources Inc. (NASDAQ:ROSE) is not the most popular stock in this group but hedge fund interest is still above average. This is a slightly positive signal but we’d rather spend our time researching stocks that hedge funds are piling on. In this regard HOS might be a better candidate to consider a long position.