Premier Inc (NASDAQ:PINC) investors should pay attention to an increase in activity from the world’s largest hedge funds of late. PINC was in 21 hedge funds’ portfolios at the end of September. There were 18 hedge funds in our database with PINC holdings at the end of the previous quarter. Our calculations also showed that PINC isn’t among the 30 most popular stocks among hedge funds.

At the end of the third quarter, a total of 21 of the hedge funds tracked by Insider Monkey were long this stock, a change of 17% from the second quarter of 2018. On the other hand, there were a total of 17 hedge funds with a bullish position in PINC at the beginning of this year. With hedge funds’ positions undergoing their usual ebb and flow, there exists a select group of key hedge fund managers who were boosting their holdings substantially (or already accumulated large positions). 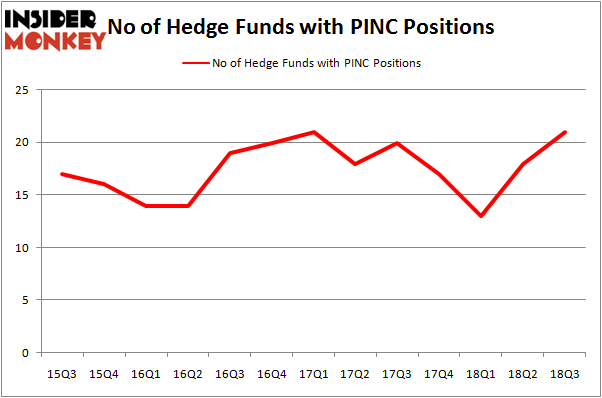 Among these funds, Renaissance Technologies held the most valuable stake in Premier Inc (NASDAQ:PINC), which was worth $59.1 million at the end of the third quarter. On the second spot was Two Sigma Advisors which amassed $29.3 million worth of shares. Moreover, GLG Partners, Millennium Management, and East Side Capital (RR Partners) were also bullish on Premier Inc (NASDAQ:PINC), allocating a large percentage of their portfolios to this stock.

As one would reasonably expect, key hedge funds have jumped into Premier Inc (NASDAQ:PINC) headfirst. Arrowstreet Capital, managed by Peter Rathjens, Bruce Clarke and John Campbell, assembled the biggest position in Premier Inc (NASDAQ:PINC). Arrowstreet Capital had $10.7 million invested in the company at the end of the quarter. Michael Castor’s Sio Capital also made a $6.6 million investment in the stock during the quarter. The other funds with new positions in the stock are Peter Algert and Kevin Coldiron’s Algert Coldiron Investors, Andrew Feldstein and Stephen Siderow’s Blue Mountain Capital, and Thomas Bailard’s Bailard Inc.

As you can see these stocks had an average of 21.25 hedge funds with bullish positions and the average amount invested in these stocks was $314 million. That figure was $214 million in PINC’s case. Avaya Holdings Corp. (NYSE:AVYA) is the most popular stock in this table. On the other hand DiamondRock Hospitality Company (NYSE:DRH) is the least popular one with only 9 bullish hedge fund positions. Premier Inc (NASDAQ:PINC) is not the least popular stock in this group but hedge fund interest is still below average. This is a slightly negative signal and we’d rather spend our time researching stocks that hedge funds are piling on. In this regard AVYA might be a better candidate to consider a long position.

Is Globalstar, Inc. (GSAT) Going to Burn These Hedge Funds?
Monthly Newsletter Strategy
Download a free copy of our newsletter and see the details inside!
Hedge Fund Resource Center
Related News
Is Premier Inc (PINC) A Good Stock To Buy? Welch Capital’s Must-Buy Healthcare Stocks Look Out Below! What’s the Deal With These 5 Falling Stocks? Why These 5 Stocks Are Enjoying Healthy Gains Today What Do Hedge Funds Think of Premier Inc (PINC)? Five Reasons You Need a Day-Trading Mentor 15 Most Important Medical Discoveries of 2018 The 10 Best Islands to Visit in 2019
Billionaire Hedge Funds