Hedge fund managers like David Einhorn, Dan Loeb, or Carl Icahn became billionaires through reaping large profits for their investors, which is why piggybacking their stock picks may provide us with significant returns as well. Many hedge funds, like Paul Singer’s Elliott Management, are pretty secretive, but we can still get some insights by analyzing their quarterly 13F filings. One of the most fertile grounds for large abnormal returns is hedge funds’ most popular small-cap picks, which are not so widely followed and often trade at a discount to their intrinsic value. In this article we will check out hedge fund activity in another small-cap stock: Matrix Service Co (NASDAQ:MTRX).

Matrix Service Co (NASDAQ:MTRX) was in 12 hedge funds’ portfolios at the end of September. MTRX has seen an increase in enthusiasm from smart money recently. There were 11 hedge funds in our database with MTRX holdings at the end of the previous quarter. Our calculations also showed that mtrx isn’t among the 30 most popular stocks among hedge funds.

What have hedge funds been doing with Matrix Service Co (NASDAQ:MTRX)?

At the end of the third quarter, a total of 12 of the hedge funds tracked by Insider Monkey held long positions in this stock, a change of 9% from the second quarter of 2018. Below, you can check out the change in hedge fund sentiment towards MTRX over the last 13 quarters. So, let’s review which hedge funds were among the top holders of the stock and which hedge funds were making big moves. 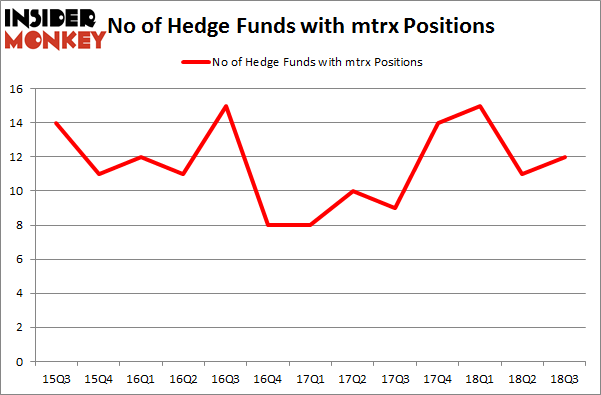 More specifically, Royce & Associates was the largest shareholder of Matrix Service Co (NASDAQ:MTRX), with a stake worth $14.8 million reported as of the end of September. Trailing Royce & Associates was AQR Capital Management, which amassed a stake valued at $11.3 million. Rutabaga Capital Management, GLG Partners, and D E Shaw were also very fond of the stock, giving the stock large weights in their portfolios.

As industrywide interest jumped, some big names were leading the bulls’ herd. Renaissance Technologies, managed by Jim Simons, assembled the biggest position in Matrix Service Co (NASDAQ:MTRX). Renaissance Technologies had $3 million invested in the company at the end of the quarter. Matthew Hulsizer’s PEAK6 Capital Management also made a $1 million investment in the stock during the quarter. The other funds with brand new MTRX positions are Joel Greenblatt’s Gotham Asset Management, Ken Griffin’s Citadel Investment Group, and Mike Vranos’s Ellington.

As you can see these stocks had an average of 18.25 hedge funds with bullish positions and the average amount invested in these stocks was $132 million. That figure was $61 million in MTRX’s case. QuinStreet Inc (NASDAQ:QNST) is the most popular stock in this table. On the other hand U.S. Xpress Enterprises, Inc. (NYSE:USX) is the least popular one with only 13 bullish hedge fund positions. Compared to these stocks Matrix Service Co (NASDAQ:MTRX) is even less popular than USX. Considering that hedge funds aren’t fond of this stock in relation to other companies analyzed in this article, it may be a good idea to analyze it in detail and understand why the smart money isn’t behind this stock. This isn’t necessarily bad news. Although it is possible that hedge funds may think the stock is overpriced and view the stock as a short candidate, they may not be very familiar with the bullish thesis. In either case more research is warranted.