There are several ways to beat the market, and investing in small cap stocks has historically been one of them. We like to improve the odds of beating the market further by examining what famous hedge fund operators such as Jeff Ubben, George Soros and Carl Icahn think. Those hedge fund operators make billions of dollars each year by hiring the best and the brightest to do research on stocks, including small cap stocks that big brokerage houses simply don’t cover. Because of Carl Icahn and other elite funds’ exemplary historical records, we pay attention to their small cap picks. In this article, we use hedge fund filing data to analyze Global Payments Inc (NYSE:GPN).

Global Payments Inc (NYSE:GPN) has experienced an increase in hedge fund sentiment in recent months. Our calculations also showed that GPN isn’t among the 30 most popular stocks among hedge funds.

At the moment there are tons of metrics market participants employ to analyze publicly traded companies. Two of the less known metrics are hedge fund and insider trading moves. We have shown that, historically, those who follow the top picks of the elite investment managers can outperform the S&P 500 by a solid margin (see the details here).

What have hedge funds been doing with Global Payments Inc (NYSE:GPN)? 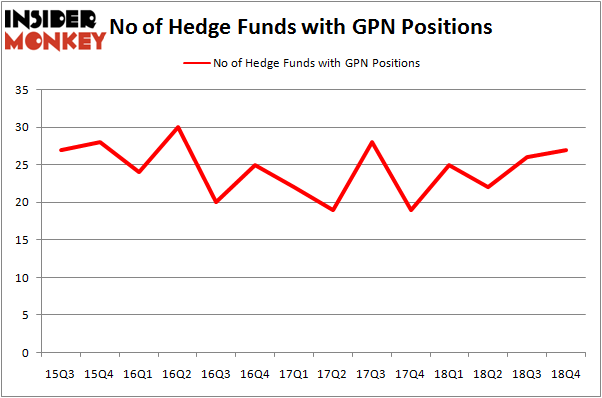 Among these funds, Alkeon Capital Management held the most valuable stake in Global Payments Inc (NYSE:GPN), which was worth $102.7 million at the end of the third quarter. On the second spot was Echo Street Capital Management which amassed $58.7 million worth of shares. Moreover, Renaissance Technologies, Citadel Investment Group, and Shellback Capital were also bullish on Global Payments Inc (NYSE:GPN), allocating a large percentage of their portfolios to this stock.

As you can see these stocks had an average of 27.75 hedge funds with bullish positions and the average amount invested in these stocks was $484 million. That figure was $476 million in GPN’s case. Aptiv PLC (NYSE:APTV) is the most popular stock in this table. On the other hand Essex Property Trust Inc (NYSE:ESS) is the least popular one with only 19 bullish hedge fund positions. Global Payments Inc (NYSE:GPN) is not the least popular stock in this group but hedge fund interest is still below average. Our calculations showed that top 15 most popular stocks among hedge funds returned 19.7% through March 15th and outperformed the S&P 500 ETF (SPY) by 6.6 percentage points. Hedge funds were also right about betting on GPN as the stock returned 30.1% and outperformed the market as well.

Here is What Hedge Funds Think About Check Point Software Technologies
Monthly Newsletter Strategy
Download a free copy of our newsletter and see the details inside!
Hedge Fund Resource Center
Related News
Do Hedge Funds Love Global Payments Inc (GPN)? Is Global Payments Inc (GPN) Going to Burn These Hedge Funds? Scout Daily Update: Conspicuous ISM Report 10 Stocks That Had Their Price Targets Raised Tuesday 5 Trending Stocks That Have Investors’ Attention Today Includes Alphabet (GOOGL) in European Hot Water Why These 5 Stocks Have Spiked Today: What You Need to Know Why Are These Stocks Trending Today? Hedge Funds Have Never Been This Bullish On Visa Inc (V) Ten of the Most Common Addictions 13 African Countries with the Largest White Population in 2018
Billionaire Hedge Funds