Hedge Funds and other institutional investors have just completed filing their 13Fs with the Securities and Exchange Commission, revealing their equity portfolios as of the end of June. At Insider Monkey, we follow nearly 750 active hedge funds and notable investors and by analyzing their 13F filings, we can determine the stocks that they are collectively bullish on. One of their picks is Cross Country Healthcare, Inc. (NASDAQ:CCRN), so let’s take a closer look at the sentiment that surrounds it in the current quarter.

Is Cross Country Healthcare, Inc. (NASDAQ:CCRN) the right pick for your portfolio? Prominent investors are turning bullish. The number of long hedge fund bets improved by 6 in recent months. Our calculations also showed that CCRN isn’t among the 30 most popular stocks among hedge funds (click for Q3 rankings and see the video below for Q2 rankings).

We leave no stone unturned when looking for the next great investment idea. For example Europe is set to become the world’s largest cannabis market, so we check out this European marijuana stock pitch. One of the most bullish analysts in America just put his money where his mouth is. He says, “I’m investing more today than I did back in early 2009.” So we check out his pitch. We read hedge fund investor letters and listen to stock pitches at hedge fund conferences. We also rely on the best performing hedge funds‘ buy/sell signals. We’re going to go over the fresh hedge fund action regarding Cross Country Healthcare, Inc. (NASDAQ:CCRN). 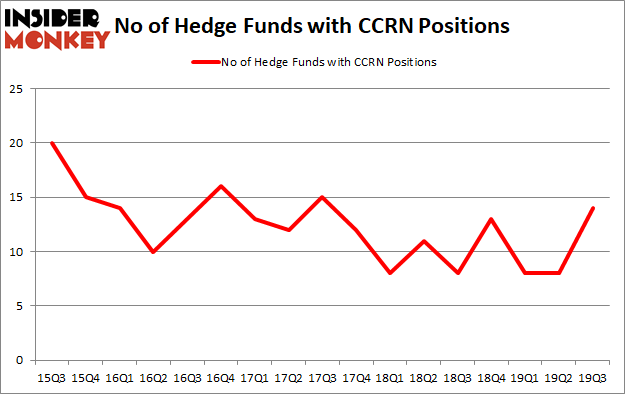 According to Insider Monkey’s hedge fund database, Chuck Royce’s Royce & Associates has the largest position in Cross Country Healthcare, Inc. (NASDAQ:CCRN), worth close to $16.8 million, accounting for 0.2% of its total 13F portfolio. The second largest stake is held by Michael Castor of Sio Capital, with a $3.4 million position; the fund has 1.1% of its 13F portfolio invested in the stock. Other professional money managers that are bullish consist of Cliff Asness’s AQR Capital Management, Renaissance Technologies and Israel Englander’s Millennium Management. In terms of the portfolio weights assigned to each position Sio Capital allocated the biggest weight to Cross Country Healthcare, Inc. (NASDAQ:CCRN), around 1.09% of its 13F portfolio. Zebra Capital Management is also relatively very bullish on the stock, setting aside 0.17 percent of its 13F equity portfolio to CCRN.

As aggregate interest increased, some big names were breaking ground themselves. Millennium Management, managed by Israel Englander, initiated the most outsized position in Cross Country Healthcare, Inc. (NASDAQ:CCRN). Millennium Management had $1.7 million invested in the company at the end of the quarter. Peter Rathjens, Bruce Clarke and John Campbell’s Arrowstreet Capital also made a $1 million investment in the stock during the quarter. The following funds were also among the new CCRN investors: Dmitry Balyasny’s Balyasny Asset Management, Michael Gelband’s ExodusPoint Capital, and Paul Marshall and Ian Wace’s Marshall Wace.

As you can see these stocks had an average of 11.5 hedge funds with bullish positions and the average amount invested in these stocks was $46 million. That figure was $31 million in CCRN’s case. Bloom Energy Corporation (NYSE:BE) is the most popular stock in this table. On the other hand NI Holdings, Inc. (NASDAQ:NODK) is the least popular one with only 7 bullish hedge fund positions. Cross Country Healthcare, Inc. (NASDAQ:CCRN) is not the most popular stock in this group but hedge fund interest is still above average. Our calculations showed that top 20 most popular stocks among hedge funds returned 37.4% in 2019 through the end of November and outperformed the S&P 500 ETF (SPY) by 9.9 percentage points. Hedge funds were also right about betting on CCRN as the stock returned 17.2% during the fourth quarter (through the end of November) and outperformed the market. Hedge funds were rewarded for their relative bullishness.