With the third-quarter round of 13F filings behind us it is time to take a look at the stocks in which some of the best money managers in the world preferred to invest or sell heading into the fourth quarter. One of these stocks was Cleveland-Cliffs Inc (NYSE:CLF).

Cleveland-Cliffs Inc (NYSE:CLF) was in 25 hedge funds’ portfolios at the end of September. CLF shareholders have witnessed an increase in hedge fund interest lately. There were 23 hedge funds in our database with CLF holdings at the end of the previous quarter. Our calculations also showed that CLF isn’t among the 30 most popular stocks among hedge funds.

If you’d ask most stock holders, hedge funds are viewed as underperforming, old investment vehicles of years past. While there are over 8,000 funds trading today, We look at the moguls of this club, about 700 funds. Most estimates calculate that this group of people control the lion’s share of the smart money’s total capital, and by keeping track of their best stock picks, Insider Monkey has unsheathed several investment strategies that have historically defeated Mr. Market. Insider Monkey’s flagship hedge fund strategy outpaced the S&P 500 index by 6 percentage points per annum since its inception in May 2014 through early November 2018. We were able to generate large returns even by identifying short candidates. Our portfolio of short stocks lost 24% since February 2017 (through December 3rd) even though the market was up nearly 23% during the same period. We just shared a list of 11 short targets in our latest quarterly update. 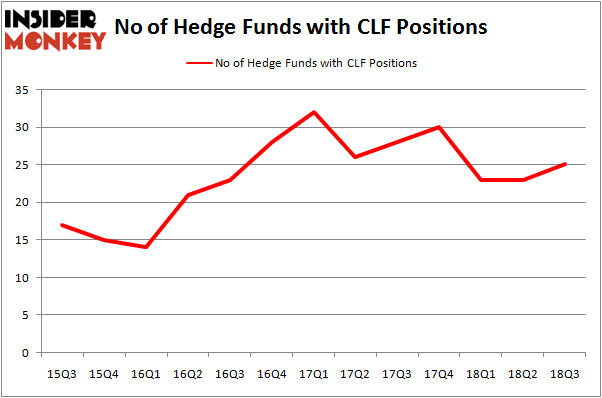 Among these funds, Fisher Asset Management held the most valuable stake in Cleveland-Cliffs Inc (NYSE:CLF), which was worth $108.5 million at the end of the third quarter. On the second spot was Contrarian Capital which amassed $98.5 million worth of shares. Moreover, D E Shaw, Millennium Management, and Key Square Capital Management were also bullish on Cleveland-Cliffs Inc (NYSE:CLF), allocating a large percentage of their portfolios to this stock.

As industrywide interest jumped, key money managers have been driving this bullishness. Fisher Asset Management, managed by Ken Fisher, assembled the biggest position in Cleveland-Cliffs Inc (NYSE:CLF). Fisher Asset Management had $108.5 million invested in the company at the end of the quarter. Ross Turner’s Pelham Capital also made a $20.7 million investment in the stock during the quarter. The following funds were also among the new CLF investors: Kevin Michael Ulrich and Anthony Davis’s Anchorage Advisors, Richard Driehaus’s Driehaus Capital, and Paul Tudor Jones’s Tudor Investment Corp.

As you can see these stocks had an average of 16.5 hedge funds with bullish positions and the average amount invested in these stocks was $456 million. That figure was $446 million in CLF’s case. Eldorado Resorts Inc (NASDAQ:ERI) is the most popular stock in this table. On the other hand United Bankshares, Inc. (NASDAQ:UBSI) is the least popular one with only 7 bullish hedge fund positions. Compared to these stocks Cleveland-Cliffs Inc (NYSE:CLF) is more popular among hedge funds. Considering that hedge funds are fond of this stock in relation to its market cap peers, it may be a good idea to analyze it in detail and potentially include it in your portfolio.

Hedge Funds Are Betting On Cooper-Standard Holdings Inc (CPS)
Monthly Newsletter Strategy
Download a free copy of our newsletter and see the details inside!
Hedge Fund Resource Center
Related News
Cliffs Natural Resources Inc. (CLF): Why You Should Pay Attention to Burgeoning Insider Buying Financial Markets Snapshot: 20+ Stories That You Should Read Today 23 Key Stories That Are Shaking Up The Finance World Today Why Cliffs Natural Resources Inc (CLF) is Trending What Is Happening In Financial Markets Today? What Is Happening In Financial Markets Today? Cliffs Natural Resources Inc (CLF) Shows Some Relative Strength Five Reasons You Need a Day-Trading Mentor 15 Most Important Medical Discoveries of 2018 The 10 Best Islands to Visit in 2019
Billionaire Hedge Funds