At the end of February we announced the arrival of the first US recession since 2009 and we predicted that the market will decline by at least 20% in (see why hell is coming). We reversed our stance on March 25th after seeing unprecedented fiscal and monetary stimulus unleashed by the Fed and the Congress. This is the perfect market for stock pickers, now that the stocks are fully valued again. In these volatile markets we scrutinize hedge fund filings to get a reading on which direction each stock might be going. In this article, we will take a closer look at hedge fund sentiment towards Six Flags Entertainment Corp (NYSE:SIX) at the end of the second quarter and determine whether the smart money was really smart about this stock.

Six Flags Entertainment Corp (NYSE:SIX) investors should pay attention to an increase in activity from the world’s largest hedge funds in recent months. Six Flags Entertainment Corp (NYSE:SIX) was in 33 hedge funds’ portfolios at the end of the second quarter of 2020. The all time high for this statistics is 41. There were 30 hedge funds in our database with SIX holdings at the end of March. Our calculations also showed that SIX isn’t among the 30 most popular stocks among hedge funds (click for Q2 rankings and see the video for a quick look at the top 5 stocks).

In the financial world there are several tools market participants can use to value stocks. Two of the best tools are hedge fund and insider trading indicators. Our researchers have shown that, historically, those who follow the best picks of the elite investment managers can beat the market by a significant margin (see the details here).

At Insider Monkey we leave no stone unturned when looking for the next great investment idea. For example, this “mom” trader turned $2000 into $2 million within 2 years. So, we are checking out her best trade idea of the month. Cannabis stocks are roaring back in 2020, which is why we are also checking out this under-the-radar stock. We read hedge fund investor letters and listen to stock pitches at hedge fund conferences. We go through lists like the 10 most profitable companies in the world to pick the best large-cap stocks to buy. Even though we recommend positions in only a tiny fraction of the companies we analyze, we check out as many stocks as we can. Now we’re going to analyze the key hedge fund action encompassing Six Flags Entertainment Corp (NYSE:SIX).

How have hedgies been trading Six Flags Entertainment Corp (NYSE:SIX)?

At the end of the second quarter, a total of 33 of the hedge funds tracked by Insider Monkey were long this stock, a change of 10% from one quarter earlier. The graph below displays the number of hedge funds with bullish position in SIX over the last 20 quarters. With hedgies’ capital changing hands, there exists a select group of noteworthy hedge fund managers who were upping their stakes considerably (or already accumulated large positions). 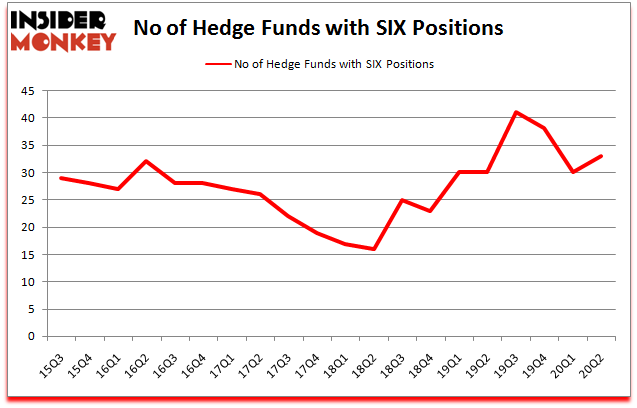 According to Insider Monkey’s hedge fund database, Rehan Jaffer’s H Partners Management has the largest position in Six Flags Entertainment Corp (NYSE:SIX), worth close to $149.8 million, accounting for 33.6% of its total 13F portfolio. On H Partners Management’s heels is Samlyn Capital, managed by Robert Pohly, which holds a $41.4 million position; the fund has 0.8% of its 13F portfolio invested in the stock. Other hedge funds and institutional investors that are bullish consist of Josh Resnick’s Jericho Capital Asset Management, Peter Rathjens, Bruce Clarke and John Campbell’s Arrowstreet Capital and Robert Bishop’s Impala Asset Management. In terms of the portfolio weights assigned to each position H Partners Management allocated the biggest weight to Six Flags Entertainment Corp (NYSE:SIX), around 33.65% of its 13F portfolio. Altai Capital is also relatively very bullish on the stock, designating 14.67 percent of its 13F equity portfolio to SIX.

As one would reasonably expect, key money managers were leading the bulls’ herd. Samlyn Capital, managed by Robert Pohly, assembled the biggest position in Six Flags Entertainment Corp (NYSE:SIX). Samlyn Capital had $41.4 million invested in the company at the end of the quarter. Josh Resnick’s Jericho Capital Asset Management also made a $40.1 million investment in the stock during the quarter. The other funds with new positions in the stock are Brad Dunkley and Blair Levinsky’s Waratah Capital Advisors, Stuart J. Zimmer’s Zimmer Partners, and Edmond M. Safra’s EMS Capital.

As you can see these stocks had an average of 16.4 hedge funds with bullish positions and the average amount invested in these stocks was $229 million. That figure was $494 million in SIX’s case. CNX Resources Corporation (NYSE:CNX) is the most popular stock in this table. On the other hand Sogou Inc. (NYSE:SOGO) is the least popular one with only 5 bullish hedge fund positions. Compared to these stocks Six Flags Entertainment Corp (NYSE:SIX) is more popular among hedge funds. Our overall hedge fund sentiment score for SIX is 82.1. Stocks with higher number of hedge fund positions relative to other stocks as well as relative to their historical range receive a higher sentiment score. Our calculations showed that top 10 most popular stocks among hedge funds returned 41.4% in 2019 and outperformed the S&P 500 ETF (SPY) by 10.1 percentage points. These stocks gained 33% in 2020 through the end of August and still beat the market by 23.2 percentage points. Unfortunately SIX wasn’t nearly as popular as these 10 stocks and hedge funds that were betting on SIX were disappointed as the stock returned 13.1% since the end of the second quarter and underperformed the market. If you are interested in investing in large cap stocks with huge upside potential, you should check out the top 10 most popular stocks among hedge funds as most of these stocks already outperformed the market in 2020.

Is SIX A Good Investment Right Now?Is SIX A Good Stock To Buy?NYSE:SIXSentiment Score Between 80 and 90Yahoo Finance