Hedge Funds Are Coming Back To Jabil Inc. (JBL)

At the end of February we announced the arrival of the first US recession since 2009 and we predicted that the market will decline by at least 20% in (see why hell is coming). We reversed our stance on March 25th after seeing unprecedented fiscal and monetary stimulus unleashed by the Fed and the Congress. This is the perfect market for stock pickers, now that the stocks are fully valued again. In these volatile markets we scrutinize hedge fund filings to get a reading on which direction each stock might be going. In this article, we will take a closer look at hedge fund sentiment towards Jabil Inc. (NYSE:JBL) at the end of the second quarter and determine whether the smart money was really smart about this stock.

Is Jabil Inc. (NYSE:JBL) a superb investment now? The best stock pickers were turning bullish. The number of long hedge fund bets went up by 11 recently. Jabil Inc. (NYSE:JBL) was in 31 hedge funds’ portfolios at the end of June. The all time high for this statistics is 34. Our calculations also showed that JBL isn’t among the 30 most popular stocks among hedge funds (click for Q2 rankings and see the video for a quick look at the top 5 stocks). There were 20 hedge funds in our database with JBL positions at the end of the first quarter.

To most investors, hedge funds are seen as worthless, old investment vehicles of the past. While there are more than 8000 funds with their doors open at present, We hone in on the crème de la crème of this group, around 850 funds. These money managers preside over bulk of all hedge funds’ total capital, and by watching their first-class picks, Insider Monkey has deciphered various investment strategies that have historically exceeded the market. Insider Monkey’s flagship short hedge fund strategy outstripped the S&P 500 short ETFs by around 20 percentage points a year since its inception in March 2017. Our portfolio of short stocks lost 34% since February 2017 (through August 17th) even though the market was up 53% during the same period. We just shared a list of 8 short targets in our latest quarterly update .

At Insider Monkey we leave no stone unturned when looking for the next great investment idea. For example, this “mom” trader turned $2000 into $2 million within 2 years. So, we are checking out her best trade idea of the month. We read hedge fund investor letters and listen to stock pitches at hedge fund conferences. We go through lists like the 10 most profitable companies in the world to pick the best large-cap stocks to buy. Even though we recommend positions in only a tiny fraction of the companies we analyze, we check out as many stocks as we can. Keeping this in mind we’re going to take a peek at the key hedge fund action regarding Jabil Inc. (NYSE:JBL).

At Q2’s end, a total of 31 of the hedge funds tracked by Insider Monkey were bullish on this stock, a change of 55% from the first quarter of 2020. On the other hand, there were a total of 26 hedge funds with a bullish position in JBL a year ago. With hedge funds’ positions undergoing their usual ebb and flow, there exists an “upper tier” of noteworthy hedge fund managers who were upping their stakes significantly (or already accumulated large positions). 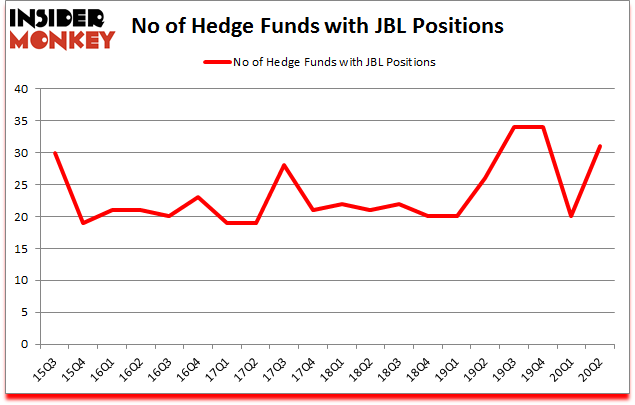 The largest stake in Jabil Inc. (NYSE:JBL) was held by AQR Capital Management, which reported holding $127.8 million worth of stock at the end of September. It was followed by Adage Capital Management with a $54.9 million position. Other investors bullish on the company included Point72 Asset Management, Holocene Advisors, and Alyeska Investment Group. In terms of the portfolio weights assigned to each position Breakline Capital allocated the biggest weight to Jabil Inc. (NYSE:JBL), around 2.04% of its 13F portfolio. Shellback Capital is also relatively very bullish on the stock, setting aside 1.35 percent of its 13F equity portfolio to JBL.

As one would reasonably expect, specific money managers have been driving this bullishness. Holocene Advisors, managed by Brandon Haley, established the most valuable position in Jabil Inc. (NYSE:JBL). Holocene Advisors had $30.3 million invested in the company at the end of the quarter. Anand Parekh’s Alyeska Investment Group also made a $24.1 million investment in the stock during the quarter. The following funds were also among the new JBL investors: Dmitry Balyasny’s Balyasny Asset Management, Ken Griffin’s Citadel Investment Group, and Ryan Tolkin (CIO)’s Schonfeld Strategic Advisors.

As you can see these stocks had an average of 17 hedge funds with bullish positions and the average amount invested in these stocks was $281 million. That figure was $376 million in JBL’s case. RH (NYSE:RH) is the most popular stock in this table. On the other hand Shell Midstream Partners LP (NYSE:SHLX) is the least popular one with only 6 bullish hedge fund positions. Jabil Inc. (NYSE:JBL) is not the most popular stock in this group but hedge fund interest is still above average. Our overall hedge fund sentiment score for JBL is 74.1. Stocks with higher number of hedge fund positions relative to other stocks as well as relative to their historical range receive a higher sentiment score. This is a slightly positive signal but we’d rather spend our time researching stocks that hedge funds are piling on. Our calculations showed that top 10 most popular stocks among hedge funds returned 41.4% in 2019 and outperformed the S&P 500 ETF (SPY) by 10.1 percentage points. These stocks gained 23.8% in 2020 through September 14th and beat the market by 17.6 percentage points. Unfortunately JBL wasn’t nearly as popular as these 10 stocks and hedge funds that were betting on JBL were disappointed as the stock returned -0.7% during the same time period and underperformed the market. If you are interested in investing in large cap stocks with huge upside potential, you should check out the top 10 most popular stocks among hedge funds as many of these stocks already outperformed the market so far this year.

Is JBL A Good Investment Right Now?Is JBL A Good Stock To Buy?NYSE:JBLSentiment Score Between 70 and 80Yahoo Finance