We are still in an overall bull market and many stocks that smart money investors were piling into surged through November 22nd. Among them, Facebook and Microsoft ranked among the top 3 picks and these stocks gained 52% and 49% respectively. Hedge funds’ top 3 stock picks returned 39.1% this year and beat the S&P 500 ETFs by nearly 13 percentage points. Investing in index funds guarantees you average returns, not superior returns. We are looking to generate superior returns for our readers. That’s why we believe it isn’t a waste of time to check out hedge fund sentiment before you invest in a stock like The Charles Schwab Corp (NYSE:SCHW).

Is The Charles Schwab Corp (NYSE:SCHW) a buy right now? The best stock pickers are betting on the stock. The number of bullish hedge fund bets advanced by 4 recently. Our calculations also showed that SCHW isn’t among the 30 most popular stocks among hedge funds (see the video below). SCHW was in 52 hedge funds’ portfolios at the end of September. There were 48 hedge funds in our database with SCHW holdings at the end of the previous quarter.

If you’d ask most investors, hedge funds are seen as unimportant, outdated investment vehicles of years past. While there are more than 8000 funds in operation at the moment, Our experts choose to focus on the elite of this club, approximately 750 funds. These money managers oversee bulk of the smart money’s total asset base, and by paying attention to their inimitable picks, Insider Monkey has uncovered a number of investment strategies that have historically surpassed the S&P 500 index. Insider Monkey’s flagship short hedge fund strategy exceeded the S&P 500 short ETFs by around 20 percentage points per year since its inception in May 2014. Our portfolio of short stocks lost 27.8% since February 2017 (through November 21st) even though the market was up more than 39% during the same period. We just shared a list of 7 short targets in our latest quarterly update .

What have hedge funds been doing with The Charles Schwab Corp (NYSE:SCHW)? 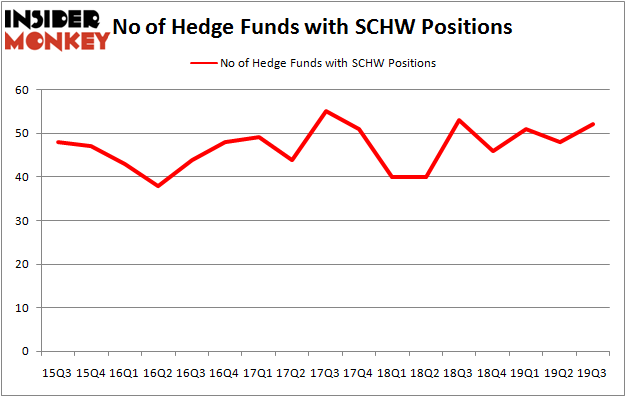 According to publicly available hedge fund and institutional investor holdings data compiled by Insider Monkey, Generation Investment Management, managed by David Blood and Al Gore, holds the most valuable position in The Charles Schwab Corp (NYSE:SCHW). Generation Investment Management has a $1.1333 billion position in the stock, comprising 8% of its 13F portfolio. Coming in second is William Duhamel of Route One Investment Company, with a $509 million position; the fund has 15.3% of its 13F portfolio invested in the stock. Remaining hedge funds and institutional investors with similar optimism contain Ricky Sandler’s Eminence Capital, Ric Dillon’s Diamond Hill Capital and Glenn Greenberg’s Brave Warrior Capital. In terms of the portfolio weights assigned to each position Route One Investment Company allocated the biggest weight to The Charles Schwab Corp (NYSE:SCHW), around 15.35% of its portfolio. Park Presidio Capital is also relatively very bullish on the stock, earmarking 9.84 percent of its 13F equity portfolio to SCHW.

As one would reasonably expect, key hedge funds were leading the bulls’ herd. Eminence Capital, managed by Ricky Sandler, assembled the biggest call position in The Charles Schwab Corp (NYSE:SCHW). Eminence Capital had $145.5 million invested in the company at the end of the quarter. Ric Dillon’s Diamond Hill Capital also initiated a $144.2 million position during the quarter. The other funds with new positions in the stock are James Parsons’s Junto Capital Management, Daniel Johnson’s Gillson Capital, and John Osterweis’s Osterweis Capital Management.

As you can see these stocks had an average of 49.5 hedge funds with bullish positions and the average amount invested in these stocks was $3237 million. That figure was $3126 million in SCHW’s case. General Motors Company (NYSE:GM) is the most popular stock in this table. On the other hand Takeda Pharmaceutical Company Limited (NYSE:TAK) is the least popular one with only 28 bullish hedge fund positions. The Charles Schwab Corp (NYSE:SCHW) is not the most popular stock in this group but hedge fund interest is still above average. Our calculations showed that top 20 most popular stocks among hedge funds returned 34.7% in 2019 through November 22nd and outperformed the S&P 500 ETF (SPY) by 8.5 percentage points. Hedge funds were also right about betting on SCHW as the stock returned 15.7% during the fourth quarter (through 11/22) and outperformed the market. Hedge funds were rewarded for their relative bullishness.