Hedge Funds and other institutional investors have just completed filing their 13Fs with the Securities and Exchange Commission, revealing their equity portfolios as of the end of June. At Insider Monkey, we follow nearly 750 active hedge funds and notable investors and by analyzing their 13F filings, we can determine the stocks that they are collectively bullish on. One of their picks is The Buckle, Inc. (NYSE:BKE), so let’s take a closer look at the sentiment that surrounds it in the current quarter.

Is The Buckle, Inc. (NYSE:BKE) undervalued? The best stock pickers are becoming more confident. The number of bullish hedge fund positions moved up by 3 in recent months. Our calculations also showed that BKE isn’t among the 30 most popular stocks among hedge funds (see the video below). BKE was in 14 hedge funds’ portfolios at the end of the second quarter of 2019. There were 11 hedge funds in our database with BKE holdings at the end of the previous quarter.

What have hedge funds been doing with The Buckle, Inc. (NYSE:BKE)? 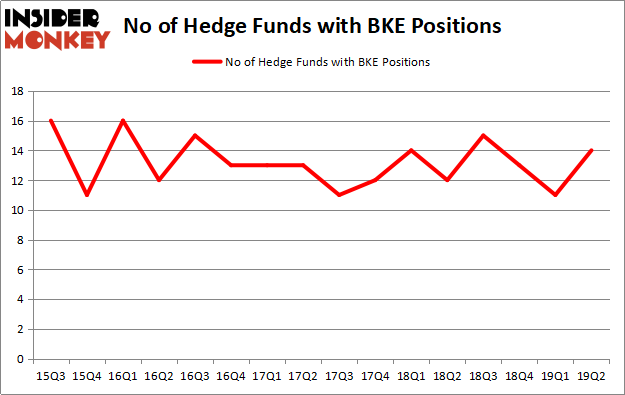 More specifically, Sprott Asset Management was the largest shareholder of The Buckle, Inc. (NYSE:BKE), with a stake worth $3.8 million reported as of the end of March. Trailing Sprott Asset Management was Royce & Associates, which amassed a stake valued at $3.6 million. AQR Capital Management, Two Sigma Advisors, and Renaissance Technologies were also very fond of the stock, giving the stock large weights in their portfolios.

Now, key money managers have been driving this bullishness. Renaissance Technologies created the most outsized position in The Buckle, Inc. (NYSE:BKE). Renaissance Technologies had $2.6 million invested in the company at the end of the quarter. Steve Cohen’s Point72 Asset Management also made a $0.7 million investment in the stock during the quarter. The other funds with brand new BKE positions are David Harding’s Winton Capital Management and Hoon Kim’s Quantinno Capital.

As you can see these stocks had an average of 10.25 hedge funds with bullish positions and the average amount invested in these stocks was $66 million. That figure was $20 million in BKE’s case. DHT Holdings Inc (NYSE:DHT) is the most popular stock in this table. On the other hand EDENOR S.A. (NYSE:EDN) is the least popular one with only 4 bullish hedge fund positions. The Buckle, Inc. (NYSE:BKE) is not the most popular stock in this group but hedge fund interest is still above average. Our calculations showed that top 20 most popular stocks among hedge funds returned 24.4% in 2019 through September 30th and outperformed the S&P 500 ETF (SPY) by 4 percentage points. Hedge funds were also right about betting on BKE as the stock returned 20.8% during the third quarter and outperformed the market. Hedge funds were rewarded for their relative bullishness.

Here is What Hedge Funds Think About Calavo Growers, Inc. (CVGW)
Monthly Newsletter Strategy
Download a free copy of our newsletter and see the details inside!
Hedge Fund Resource Center
Related News
Here’s What Hedge Funds Think About The Buckle, Inc. (BKE) Is The Buckle, Inc. (BKE) A Good Stock To Buy? 13G Filing: Royce & Associates and Buckle Inc (BKE) Are Hedge Funds On To Something With Buckle Inc (BKE)? Why Inventergy, Buckle, Whole Foods, and Two Other Stocks Are Making Headlines Why Are These Five Stocks Deep in the Red? Struggling Jewelry Retailer Registers Insider Buying, Plus Insider Selling at 3 Other Companies 11 Largest Auto Insurance Companies In The US In 2019 10 Poorest Cities in America in 2019 8 Lowest Tar and Nicotine Cigarette Brands in 2019
Billionaire Hedge Funds