The financial regulations require hedge funds and wealthy investors that exceeded the $100 million equity holdings threshold to file a report that shows their positions at the end of every quarter. Even though it isn’t the intention, these filings to a certain extent level the playing field for ordinary investors. The latest round of 13F filings disclosed the funds’ positions on September 30th. We at Insider Monkey have made an extensive database of nearly 750 of those established hedge funds and famous value investors’ filings. In this article, we analyze how these elite funds and prominent investors traded Tenneco Inc (NYSE:TEN) based on those filings.

Tenneco Inc (NYSE:TEN) has experienced an increase in enthusiasm from smart money recently. TEN was in 13 hedge funds’ portfolios at the end of the third quarter of 2019. There were 12 hedge funds in our database with TEN positions at the end of the previous quarter. Our calculations also showed that TEN isn’t among the 30 most popular stocks among hedge funds (click for Q3 rankings and see the video below for Q2 rankings).

In today’s marketplace there are a lot of metrics investors have at their disposal to evaluate publicly traded companies. A couple of the best metrics are hedge fund and insider trading signals. Our experts have shown that, historically, those who follow the top picks of the top money managers can outperform the S&P 500 by a healthy margin (see the details here).

We leave no stone unturned when looking for the next great investment idea. For example Europe is set to become the world’s largest cannabis market, so we check out this European marijuana stock pitch. One of the most bullish analysts in America just put his money where his mouth is. He says, “I’m investing more today than I did back in early 2009.” So we check out his pitch. We read hedge fund investor letters and listen to stock pitches at hedge fund conferences. We also rely on the best performing hedge funds‘ buy/sell signals. Let’s check out the key hedge fund action surrounding Tenneco Inc (NYSE:TEN).

What does smart money think about Tenneco Inc (NYSE:TEN)?

Heading into the fourth quarter of 2019, a total of 13 of the hedge funds tracked by Insider Monkey held long positions in this stock, a change of 8% from the previous quarter. On the other hand, there were a total of 22 hedge funds with a bullish position in TEN a year ago. With the smart money’s positions undergoing their usual ebb and flow, there exists an “upper tier” of notable hedge fund managers who were increasing their stakes considerably (or already accumulated large positions). 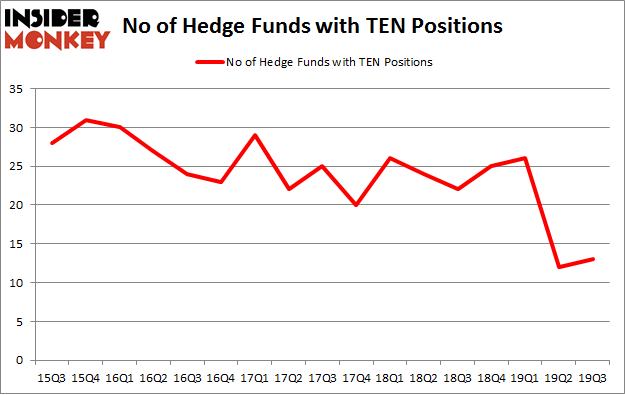 The largest stake in Tenneco Inc (NYSE:TEN) was held by Icahn Capital, which reported holding $70.8 million worth of stock at the end of September. It was followed by Lyrical Asset Management with a $30.8 million position. Other investors bullish on the company included Renaissance Technologies, GAMCO Investors, and Whitebox Advisors. In terms of the portfolio weights assigned to each position Albar Capital allocated the biggest weight to Tenneco Inc (NYSE:TEN), around 0.49% of its 13F portfolio. Lyrical Asset Management is also relatively very bullish on the stock, designating 0.46 percent of its 13F equity portfolio to TEN.

As aggregate interest increased, specific money managers were leading the bulls’ herd. Albar Capital, managed by Javier Velazquez, created the most valuable position in Tenneco Inc (NYSE:TEN). Albar Capital had $1.1 million invested in the company at the end of the quarter. John Overdeck and David Siegel’s Two Sigma Advisors also made a $1.1 million investment in the stock during the quarter. The other funds with brand new TEN positions are Peter Rathjens, Bruce Clarke and John Campbell’s Arrowstreet Capital and Gavin Saitowitz and Cisco J. del Valle’s Springbok Capital.

As you can see these stocks had an average of 18 hedge funds with bullish positions and the average amount invested in these stocks was $125 million. That figure was $130 million in TEN’s case. Funko, Inc. (NASDAQ:FNKO) is the most popular stock in this table. On the other hand Brigham Minerals, Inc. (NYSE:MNRL) is the least popular one with only 14 bullish hedge fund positions. Compared to these stocks Tenneco Inc (NYSE:TEN) is even less popular than MNRL. Hedge funds dodged a bullet by taking a bearish stance towards TEN. Our calculations showed that the top 20 most popular hedge fund stocks returned 37.4% in 2019 through the end of November and outperformed the S&P 500 ETF (SPY) by 9.9 percentage points. Unfortunately TEN wasn’t nearly as popular as these 20 stocks (hedge fund sentiment was very bearish); TEN investors were disappointed as the stock returned -1% during the fourth quarter (through the end of November) and underperformed the market. If you are interested in investing in large cap stocks with huge upside potential, you should check out the top 20 most popular stocks among hedge funds as 70 percent of these stocks already outperformed the market so far in Q4.