Hedge fund managers like David Einhorn, Dan Loeb, or Carl Icahn became billionaires through reaping large profits for their investors, which is why piggybacking their stock picks may provide us with significant returns as well. Many hedge funds, like Paul Singer’s Elliott Management, are pretty secretive, but we can still get some insights by analyzing their quarterly 13F filings. One of the most fertile grounds for large abnormal returns is hedge funds’ most popular small-cap picks, which are not so widely followed and often trade at a discount to their intrinsic value. In this article we will check out hedge fund activity in another small-cap stock: Simon Property Group, Inc (NYSE:SPG).

Is Simon Property Group, Inc (NYSE:SPG) ready to rally soon? Money managers are turning bullish. The number of long hedge fund positions improved by 5 recently. SPG was in 25 hedge funds’ portfolios at the end of the third quarter of 2018. There were 20 hedge funds in our database with SPG positions at the end of the previous quarter. SPG clearly wasn’t one of the most popular stocks among hedge funds, but we may see a different picture when we compare its popularity against similarly valued stocks.

To most investors, hedge funds are seen as slow, outdated investment tools of yesteryear. While there are more than 8000 funds trading at the moment, Our experts hone in on the elite of this club, about 700 funds. These money managers shepherd the majority of all hedge funds’ total asset base, and by tailing their inimitable picks, Insider Monkey has revealed a number of investment strategies that have historically outpaced the S&P 500 index. Insider Monkey’s flagship hedge fund strategy defeated the S&P 500 index by 6 percentage points per annum since its inception in May 2014 through early November 2018. We were able to generate large returns even by identifying short candidates. Our portfolio of short stocks lost 26.1% since February 2017 even though the market was up nearly 19% during the same period. We just shared a list of 11 short targets in our latest quarterly update.

What does the smart money think about Simon Property Group, Inc (NYSE:SPG)?

At Q3’s end, a total of 25 of the hedge funds tracked by Insider Monkey were bullish on this stock, a change of 25% from one quarter earlier. Below, you can check out the change in hedge fund sentiment towards SPG over the last 13 quarters. With hedge funds’ positions undergoing their usual ebb and flow, there exists an “upper tier” of notable hedge fund managers who were upping their stakes considerably (or already accumulated large positions). 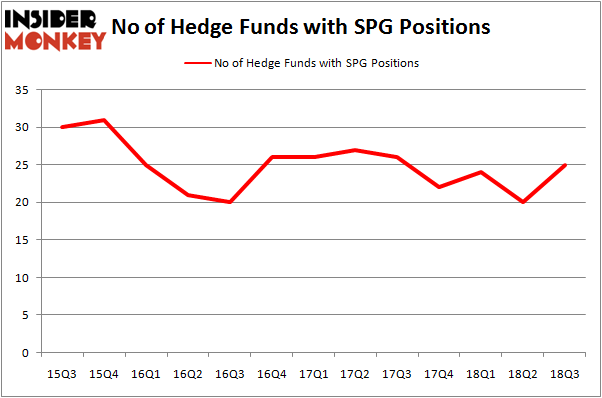 As you can see these stocks had an average of 46.5 hedge funds with bullish positions and the average amount invested in these stocks was $3568 million. That figure was $812 million in SPG’s case. Shire PLC (NASDAQ:SHPG) is the most popular stock in this table. On the other hand, Lloyds Banking Group PLC (NYSE:LYG) is the least popular one with only 5 bullish hedge fund positions. Simon Property Group, Inc (NYSE:SPG) is not the least popular stock in this group but hedge fund interest is still below average. This is a slightly negative signal and we’d rather spend our time researching stocks that hedge funds are piling on. In this regard SHPG might be a better candidate to consider a long position.