Out of thousands of stocks that are currently traded on the market, it is difficult to identify those that will really generate strong returns. Hedge funds and institutional investors spend millions of dollars on analysts with MBAs and PhDs, who are industry experts and well connected to other industry and media insiders on top of that. Individual investors can piggyback the hedge funds employing these talents and can benefit from their vast resources and knowledge in that way. We analyze quarterly 13F filings of nearly 750 hedge funds and, by looking at the smart money sentiment that surrounds a stock, we can determine whether it has the potential to beat the market over the long-term. Therefore, let’s take a closer look at what smart money thinks about Northwest Natural Holding Company (NYSE:NWN).

Northwest Natural Holding Company (NYSE:NWN) was in 12 hedge funds’ portfolios at the end of June. NWN investors should pay attention to an increase in hedge fund interest of late. There were 11 hedge funds in our database with NWN positions at the end of the previous quarter. Our calculations also showed that NWN isn’t among the 30 most popular stocks among hedge funds (view the video below).

In the 21st century investor’s toolkit there are a large number of tools shareholders have at their disposal to size up stocks. A pair of the most under-the-radar tools are hedge fund and insider trading interest. Our experts have shown that, historically, those who follow the top picks of the elite hedge fund managers can outperform the market by a significant margin (see the details here). 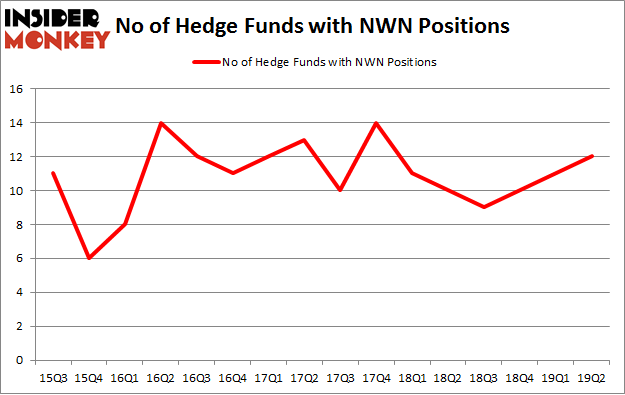 Among these funds, Renaissance Technologies held the most valuable stake in Northwest Natural Holding Company (NYSE:NWN), which was worth $39.8 million at the end of the second quarter. On the second spot was Fisher Asset Management which amassed $13.1 million worth of shares. Moreover, GLG Partners, Millennium Management, and Citadel Investment Group were also bullish on Northwest Natural Holding Company (NYSE:NWN), allocating a large percentage of their portfolios to this stock.

With a general bullishness amongst the heavyweights, key hedge funds were breaking ground themselves. Balyasny Asset Management, managed by Dmitry Balyasny, initiated the biggest position in Northwest Natural Holding Company (NYSE:NWN). Balyasny Asset Management had $1.2 million invested in the company at the end of the quarter. Paul Marshall and Ian Wace’s Marshall Wace LLP also made a $0.9 million investment in the stock during the quarter. The following funds were also among the new NWN investors: Jeffrey Talpins’s Element Capital Management and Steve Cohen’s Point72 Asset Management.

As you can see these stocks had an average of 18.25 hedge funds with bullish positions and the average amount invested in these stocks was $106 million. That figure was $81 million in NWN’s case. Acacia Communications, Inc. (NASDAQ:ACIA) is the most popular stock in this table. On the other hand Senior Housing Properties Trust (NASDAQ:SNH) is the least popular one with only 13 bullish hedge fund positions. Compared to these stocks Northwest Natural Holding Company (NYSE:NWN) is even less popular than SNH. Our calculations showed that top 20 most popular stocks among hedge funds returned 24.4% in 2019 through September 30th and outperformed the S&P 500 ETF (SPY) by 4 percentage points. A small number of hedge funds were also right about betting on NWN, though not to the same extent, as the stock returned 3.3% during the third quarter and outperformed the market as well.