The Insider Monkey team has completed processing the quarterly 13F filings for the June quarter submitted by the hedge funds and other money managers included in our extensive database. Most hedge fund investors experienced strong gains on the back of a strong market performance, which certainly propelled them to adjust their equity holdings so as to maintain the desired risk profile. As a result, the relevancy of these public filings and their content is indisputable, as they may reveal numerous high-potential stocks. The following article will discuss the smart money sentiment towards Nexstar Media Group, Inc. (NASDAQ:NXST).

Is Nexstar Media Group, Inc. (NASDAQ:NXST) a buy, sell, or hold? The smart money is becoming hopeful. The number of long hedge fund positions improved by 9 recently. Our calculations also showed that NXST isn’t among the 30 most popular stocks among hedge funds (see the video below). NXST was in 40 hedge funds’ portfolios at the end of June. There were 31 hedge funds in our database with NXST holdings at the end of the previous quarter.

To most investors, hedge funds are viewed as slow, old investment tools of the past. While there are greater than 8000 funds with their doors open today, We choose to focus on the leaders of this club, about 750 funds. It is estimated that this group of investors control bulk of all hedge funds’ total capital, and by tailing their matchless picks, Insider Monkey has found many investment strategies that have historically outperformed the broader indices. Insider Monkey’s flagship hedge fund strategy outpaced the S&P 500 index by around 5 percentage points annually since its inception in May 2014. We were able to generate large returns even by identifying short candidates. Our portfolio of short stocks lost 25.7% since February 2017 (through September 30th) even though the market was up more than 33% during the same period. We just shared a list of 10 short targets in our latest quarterly update .

How have hedgies been trading Nexstar Media Group, Inc. (NASDAQ:NXST)? 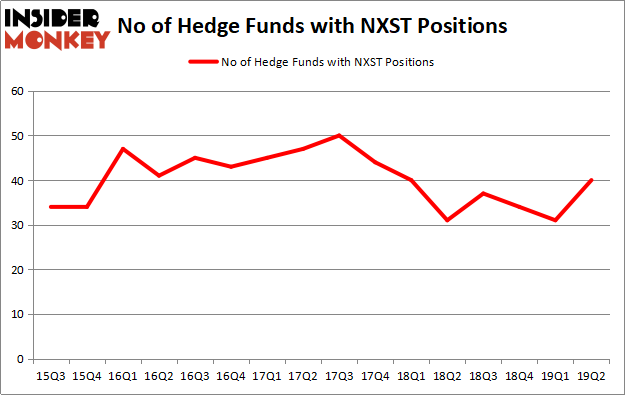 As you can see these stocks had an average of 22.75 hedge funds with bullish positions and the average amount invested in these stocks was $342 million. That figure was $1118 million in NXST’s case. MGIC Investment Corporation (NYSE:MTG) is the most popular stock in this table. On the other hand Seaboard Corporation (NYSEAMEX:SEB) is the least popular one with only 16 bullish hedge fund positions. Compared to these stocks Nexstar Media Group, Inc. (NASDAQ:NXST) is more popular among hedge funds. Our calculations showed that top 20 most popular stocks among hedge funds returned 24.4% in 2019 through September 30th and outperformed the S&P 500 ETF (SPY) by 4 percentage points. Unfortunately NXST wasn’t nearly as popular as these 20 stocks and hedge funds that were betting on NXST were disappointed as the stock returned 1.8% during the third quarter and slightly underperformed the market. If you are interested in investing in large cap stocks with huge upside potential, you should check out the top 20 most popular stocks among hedge funds as many of these stocks already outperformed the market in Q3.