Amid an overall market correction, many stocks that smart money investors were collectively bullish on tanked during the fourth quarter. Among them, Amazon and Netflix ranked among the top 30 picks and both lost around 20%. Facebook, which was the second most popular stock, lost 14% amid uncertainty regarding the interest rates and tech valuations. Nevertheless, our research shows that most of the stocks that smart money likes historically generate strong risk-adjusted returns. This is why following the smart money sentiment is a useful tool at identifying the next stock to invest in. In this article we are going to take a look at Kraft Heinz Co (NASDAQ:KHC) and try to determine whether it could be a worthy addition to your portfolio.

Kraft Heinz Co (NASDAQ:KHC) investors should be aware of an increase in support from the world’s most elite money managers lately. The company was in 37 hedge funds’ portfolios at the end of the third quarter of 2018, which is up by 10 from the previous quarter. In spite of this recent bullishness the company was not one of the 30 most popular stocks among ALL hedge funds. Still, that doesn’t necessarily mean it is not worthy of your attention, which is why we are going to carefully examine it further in the article.

In the 21st century investor’s toolkit there are dozens of methods stock market investors can use to assess publicly traded companies. Some of the less known methods are hedge fund and insider trading sentiment. Our researchers have shown that, historically, those who follow the best picks of the elite fund managers can outperform the broader indices by a superb amount (see the details here).

While researching about Kraft Heinz Co (NASDAQ:KHC), we tracked down this Wedgewood Partners’ Third Quarter 2018 Client Letter, in which the investment manager talks about why it has decided to drop this stock in the third quarter. Here is that part of the letter:

“We sold our remaining holdings in Kraft Heinz after reducing our position last year, primarily on the elongated cadence of continued acquisitions. Our thesis for the remaining position in Kraft Heinz was reliant on the Company’s ability and tolerance for a steady cadence of inorganic growth – not unlike what we have seen at several companies where 3G Capital has a controlling stake. We expect Kraft Heinz to be an expandable platform for global brands, where the Company can acquire chronically under-earning branded consumer portfolios and implement a profit-oriented culture to drive long-term growth and value creation. While the Company can still execute this approach, we think the timeline and opportunity cost of waiting for this execution has extended and risen, respectively. We think a difficult industry backdrop has contributed to management’s trepidation for executing a deal, as well as potential targets that are less willing to cede control. As consumer brands continue to see pressure from private label and receive more pushback from an increasingly consolidated distribution channel, we believe it is inevitable that brands become more amenable to acquisition by Kraft Heinz. However, until that timeline becomes clearer, we decided to liquidate our remaining position in Kraft Heinz and allocate the proceeds to businesses that have more visible growth.”

What have hedge funds been doing with Kraft Heinz Co (NASDAQ:KHC)? 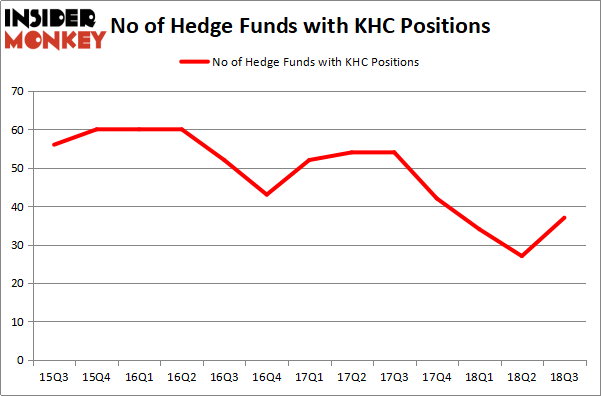 More specifically, Berkshire Hathaway was the largest shareholder of Kraft Heinz Co (NASDAQ:KHC), with a stake worth $17945.7 million reported as of the end of September. Trailing Berkshire Hathaway was Citadel Investment Group, which amassed a stake valued at $364 million. D E Shaw, Element Capital Management, and Millennium Management were also very fond of the stock, giving the stock large weights in their portfolios.

As aggregate interest increased, some big names have jumped into Kraft Heinz Co (NASDAQ:KHC) headfirst. Element Capital Management, managed by Jeffrey Talpins, assembled the biggest position in Kraft Heinz Co (NASDAQ:KHC). Element Capital Management had $133 million invested in the company at the end of the quarter. John A. Levin’s Levin Capital Strategies also made a $84.5 million investment in the stock during the quarter. The following funds were also among the new KHC investors: George Soros’ Soros Fund Management, Gregg Moskowitz’ Interval Partners, and Benjamin A. Smith’s Laurion Capital Management.

As you can see these stocks had an average of 53 hedge funds with bullish positions and the average amount invested in these stocks was $5.03 billion. That figure was $19.06 billion in KHC’s case. Aetna Inc. (NYSE:AET) is the most popular stock in this table. On the other hand Automatic Data Processing, Inc. (NASDAQ:ADP) is the least popular one with only 35 bullish hedge fund positions. Kraft Heinz Co (NASDAQ:KHC) is not the least popular stock in this group but hedge fund interest is still below average. This is a slightly negative signal and we’d rather spend our time researching stocks that hedge funds are piling on. In this regard AET might be a better candidate to consider a long position.