Hedge funds and large money managers usually invest with a focus on the long-term horizon and, therefore, short-lived dips or bumps on the charts, usually don’t make them change their opinion towards a company. This time it may be different. During the fourth quarter of 2018 we observed increased volatility and small-cap stocks underperformed the market. Things completely reversed during the first half of 2019. Hedge fund investor letters indicated that they are cutting their overall exposure, closing out some position and doubling down on others. Let’s take a look at the hedge fund sentiment towards ICICI Bank Limited (NYSE:IBN) to find out whether it was one of their high conviction long-term ideas.

Is ICICI Bank Limited (NYSE:IBN) a buy here? Prominent investors are taking an optimistic view. The number of bullish hedge fund positions rose by 3 in recent months. Our calculations also showed that IBN isn’t among the 30 most popular stocks among hedge funds (see the video below). IBN was in 29 hedge funds’ portfolios at the end of the second quarter of 2019. There were 26 hedge funds in our database with IBN holdings at the end of the previous quarter.

Unlike some fund managers who are betting on Dow reaching 40000 in a year, our long-short investment strategy doesn’t rely on bull markets to deliver double digit returns. We only rely on hedge fund buy/sell signals. We’re going to take a peek at the new hedge fund action encompassing ICICI Bank Limited (NYSE:IBN).

Heading into the third quarter of 2019, a total of 29 of the hedge funds tracked by Insider Monkey held long positions in this stock, a change of 12% from one quarter earlier. By comparison, 22 hedge funds held shares or bullish call options in IBN a year ago. With hedgies’ positions undergoing their usual ebb and flow, there exists a select group of notable hedge fund managers who were adding to their holdings substantially (or already accumulated large positions). 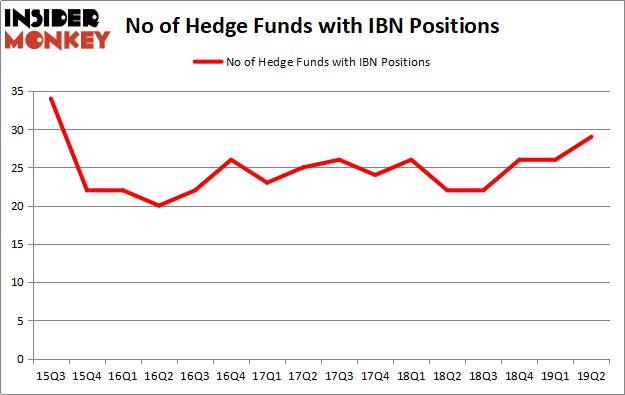 The largest stake in ICICI Bank Limited (NYSE:IBN) was held by Oaktree Capital Management, which reported holding $108.7 million worth of stock at the end of March. It was followed by Driehaus Capital with a $103.2 million position. Other investors bullish on the company included Samlyn Capital, LMR Partners, and Two Creeks Capital Management.

As one would reasonably expect, some big names have been driving this bullishness. Discovery Capital Management, managed by Rob Citrone, established the largest position in ICICI Bank Limited (NYSE:IBN). Discovery Capital Management had $32.5 million invested in the company at the end of the quarter. Renaissance Technologies also made a $16 million investment in the stock during the quarter. The other funds with brand new IBN positions are Charles Clough’s Clough Capital Partners, Steve Cohen’s Point72 Asset Management, and Nehal Chopra’s Ratan Capital Group.

As you can see these stocks had an average of 34 hedge funds with bullish positions and the average amount invested in these stocks was $1961 million. That figure was $913 million in IBN’s case. Fidelity National Information Services Inc. (NYSE:FIS) is the most popular stock in this table. On the other hand Koninklijke Philips NV (NYSE:PHG) is the least popular one with only 8 bullish hedge fund positions. ICICI Bank Limited (NYSE:IBN) is not the least popular stock in this group but hedge fund interest is still below average. This is a slightly negative signal and we’d rather spend our time researching stocks that hedge funds are piling on. Our calculations showed that top 20 most popular stocks among hedge funds returned 24.4% in 2019 through September 30th and outperformed the S&P 500 ETF (SPY) by 4 percentage points. Unfortunately IBN wasn’t nearly as popular as these 20 stocks (hedge fund sentiment was quite bearish); IBN investors were disappointed as the stock returned -3% during the third quarter and underperformed the market. If you are interested in investing in large cap stocks with huge upside potential, you should check out the top 20 most popular stocks among hedge funds as many of these stocks already outperformed the market so far in 2019.