The financial regulations require hedge funds and wealthy investors that crossed the $100 million equity holdings threshold to file a report that shows their positions at the end of every quarter. Even though it isn’t the intention, these filings to a certain extent level the playing field for ordinary investors. The latest round of 13F filings disclosed the funds’ positions on June 28th. We at Insider Monkey have made an extensive database of nearly 750 of those established hedge funds and famous value investors’ filings. In this article, we analyze how these elite funds and prominent investors traded First Majestic Silver Corp (NYSE:AG) based on those filings.

Is First Majestic Silver Corp (NYSE:AG) a superb investment today? Money managers are becoming more confident. The number of long hedge fund positions went up by 1 lately. Our calculations also showed that AG isn’t among the 30 most popular stocks among hedge funds (see the video below). AG was in 9 hedge funds’ portfolios at the end of June. There were 8 hedge funds in our database with AG positions at the end of the previous quarter.

According to most stock holders, hedge funds are seen as unimportant, old financial tools of the past. While there are more than 8000 funds in operation at the moment, We choose to focus on the top tier of this club, approximately 750 funds. These hedge fund managers shepherd the majority of the smart money’s total capital, and by tracking their inimitable picks, Insider Monkey has unsheathed a number of investment strategies that have historically beaten the broader indices. Insider Monkey’s flagship hedge fund strategy surpassed the S&P 500 index by around 5 percentage points annually since its inception in May 2014. We were able to generate large returns even by identifying short candidates. Our portfolio of short stocks lost 25.7% since February 2017 (through September 30th) even though the market was up more than 33% during the same period. We just shared a list of 10 short targets in our latest quarterly update . 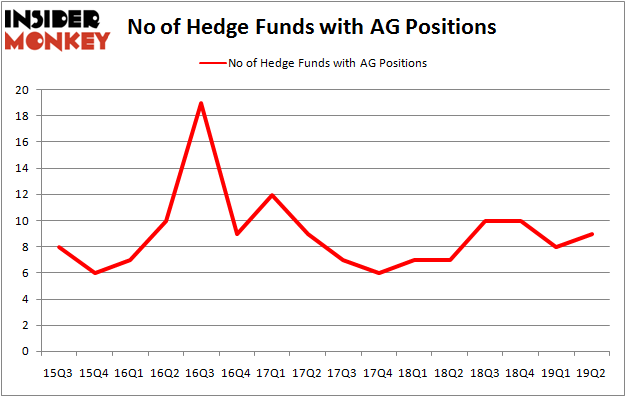 The largest stake in First Majestic Silver Corp (NYSE:AG) was held by Millennium Management, which reported holding $6.8 million worth of stock at the end of March. It was followed by Sprott Asset Management with a $5.9 million position. Other investors bullish on the company included Citadel Investment Group, Citadel Investment Group, and D E Shaw.

Now, key hedge funds were breaking ground themselves. Millennium Management, managed by Israel Englander, created the most outsized position in First Majestic Silver Corp (NYSE:AG). Millennium Management had $6.8 million invested in the company at the end of the quarter. Ken Griffin’s Citadel Investment Group also initiated a $3.6 million position during the quarter. The other funds with new positions in the stock are Allan Teh’s Kamunting Street Capital, Charles Davidson and Joseph Jacobs’s Wexford Capital, and Mark Broach’s Manatuck Hill Partners.

As you can see these stocks had an average of 14 hedge funds with bullish positions and the average amount invested in these stocks was $183 million. That figure was $23 million in AG’s case. Coherus Biosciences Inc (NASDAQ:CHRS) is the most popular stock in this table. On the other hand BP Midstream Partners LP (NYSE:BPMP) is the least popular one with only 5 bullish hedge fund positions. First Majestic Silver Corp (NYSE:AG) is not the least popular stock in this group but hedge fund interest is still below average. Our calculations showed that top 20 most popular stocks among hedge funds returned 24.4% in 2019 through September 30th and outperformed the S&P 500 ETF (SPY) by 4 percentage points. A small number of hedge funds were also right about betting on AG as the stock returned 14.9% during the same time frame and outperformed the market by an even larger margin.