Domino’s Pizza, Inc. (NYSE:DPZ) investors should pay attention to an increase in hedge fund interest in recent months. Our calculations also showed that DPZ isn’t among the 30 most popular stocks among hedge funds. 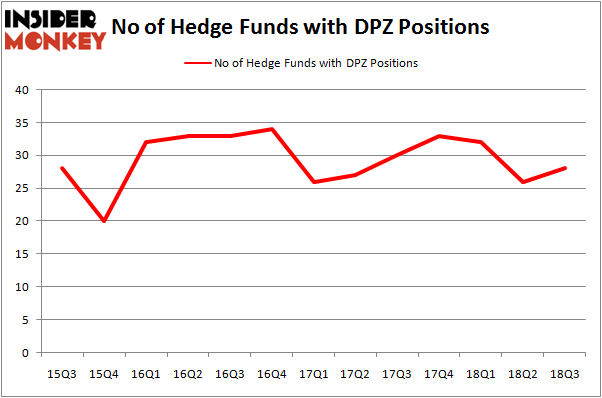 Among these funds, Renaissance Technologies held the most valuable stake in Domino’s Pizza, Inc. (NYSE:DPZ), which was worth $938.6 million at the end of the third quarter. On the second spot was Tiger Global Management LLC which amassed $620.8 million worth of shares. Moreover, Fisher Asset Management, Two Sigma Advisors, and Hitchwood Capital Management were also bullish on Domino’s Pizza, Inc. (NYSE:DPZ), allocating a large percentage of their portfolios to this stock.

Now, key hedge funds have been driving this bullishness. Hitchwood Capital Management, managed by James Crichton, created the most outsized position in Domino’s Pizza, Inc. (NYSE:DPZ). Hitchwood Capital Management had $59 million invested in the company at the end of the quarter. James Parsons’s Junto Capital Management also made a $29.6 million investment in the stock during the quarter. The other funds with new positions in the stock are Robert Pohly’s Samlyn Capital, Dmitry Balyasny’s Balyasny Asset Management, and Andrew Feldstein and Stephen Siderow’s Blue Mountain Capital.

As you can see these stocks had an average of 21 hedge funds with bullish positions and the average amount invested in these stocks was $1.55 billion. That figure was $2.3 billion in DPZ’s case. HEICO Corporation (NYSE:HEI) is the most popular stock in this table. On the other hand Cenovus Energy Inc (NYSE:CVE) is the least popular one with only 13 bullish hedge fund positions. Domino’s Pizza, Inc. (NYSE:DPZ) is not the most popular stock in this group but hedge fund interest is still above average. This is a slightly positive signal but we’d rather spend our time researching stocks that hedge funds are piling on. In this regard HEI might be a better candidate to consider a long position.

Hedge Funds Are Dumping Gilead Sciences, Inc. (GILD)
Monthly Newsletter Strategy
Download a free copy of our newsletter and see the details inside!
Hedge Fund Resource Center
Related News
Domino’s Pizza, Inc. (DPZ): Still A Hot Investment or Have We Hit Peak Pizza? 25 Stocks Billionaires Are Piling On Melvin Capital Management’s Returns, AUM, and Holdings 3 Stocks to Buy Ahead of the 2018 World Cup 11 Biggest Fast Food Franchises In The World In 2017 15 Largest, Most Popular and Successful Fast Food Chains In The World 11 Most Successful Fast Food Chains In The World The 10 Best Islands to Visit in 2019 5 Most Socially Responsible Companies in America 5 Ways You Can Eliminate Credit Card Debt
Billionaire Hedge Funds