The market has been volatile as the Federal Reserve continues its rate hikes to normalize the interest rates. Small cap stocks have been hit hard as a result, as the Russell 2000 ETF (IWM) has underperformed the larger S&P 500 ETF (SPY) by about 4 percentage points through November 16th. SEC filings and hedge fund investor letters indicate that the smart money seems to be paring back their overall long exposure since summer months, and the funds’ movements is one of the reasons why the major indexes have retraced. In this article, we analyze what the smart money thinks of Charter Communications, Inc. (NASDAQ:CHTR) and find out how it is affected by hedge funds’ moves.

Charter Communications, Inc. (NASDAQ:CHTR) investors should be aware of an increase in enthusiasm from smart money of late. Our calculations also showed that CHTR isn’t among the 30 most popular stocks among hedge funds.

Heading into the fourth quarter of 2018, a total of 67 of the hedge funds tracked by Insider Monkey held long positions in this stock, a change of 20% from one quarter earlier. The graph below displays the number of hedge funds with a bullish position in CHTR over the last 13 quarters. So, let’s examine which hedge funds were among the top holders of the stock and which hedge funds were making big moves. 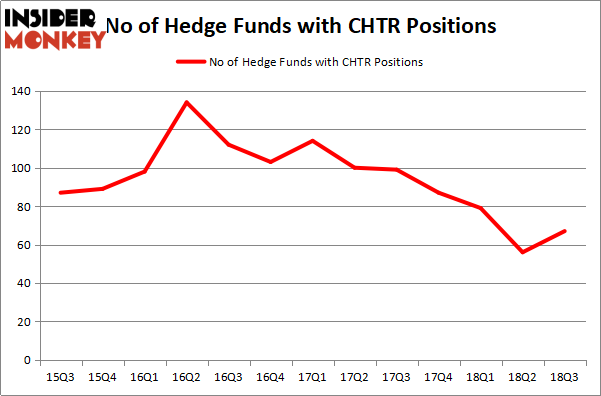 When looking at the institutional investors followed by Insider Monkey, Berkshire Hathaway, managed by Warren Buffett, holds the most valuable position in Charter Communications, Inc. (NASDAQ:CHTR). Berkshire Hathaway has a $2.3923 billion position in the stock, comprising 1.1% of its 13F portfolio. On Berkshire Hathaway’s heels is Egerton Capital Limited, led by John Armitage, holding a $890.2 million position; 6.6% of its 13F portfolio is allocated to the stock. Some other peers that hold long positions consist of John H. Scully’s SPO Advisory Corp, Farallon Capital and Robert Rodriguez and Steven Romick’s First Pacific Advisors LLC.

As you can see these stocks had an average of 24 hedge funds with bullish positions and the average amount invested in these stocks was $851 million. That figure was $8621 million in CHTR’s case. EOG Resources Inc (NYSE:EOG) is the most popular stock in this table. On the other hand The Bank of Nova Scotia (NYSE:BNS) is the least popular one with only 11 bullish hedge fund positions. Compared to these stocks Charter Communications, Inc. (NASDAQ:CHTR) is more popular among hedge funds. Considering that hedge funds are fond of this stock in relation to its market cap peers, it may be a good idea to analyze it in detail and potentially include it in your portfolio.