After several tireless days we have finished crunching the numbers from nearly 750 13F filings issued by the elite hedge funds and other investment firms that we track at Insider Monkey, which disclosed those firms’ equity portfolios as of June 28. The results of that effort will be put on display in this article, as we share valuable insight into the smart money sentiment towards Century Communities, Inc (NYSE:CCS).

Is Century Communities, Inc (NYSE:CCS) an attractive investment now? Prominent investors are getting more bullish. The number of bullish hedge fund positions inched up by 1 in recent months. Our calculations also showed that CCS isn’t among the 30 most popular stocks among hedge funds (see the video below). CCS was in 17 hedge funds’ portfolios at the end of the second quarter of 2019. There were 16 hedge funds in our database with CCS positions at the end of the previous quarter. 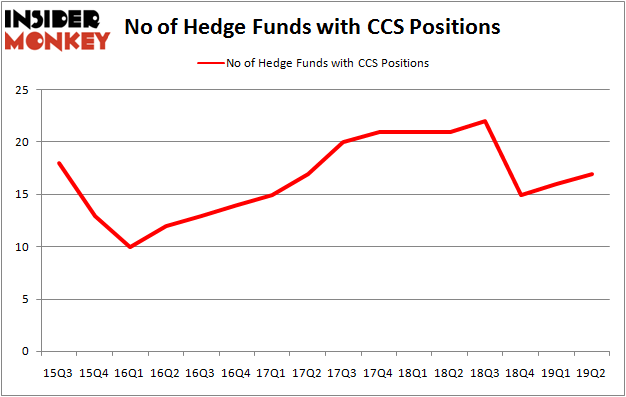 At Q2’s end, a total of 17 of the hedge funds tracked by Insider Monkey were bullish on this stock, a change of 6% from the first quarter of 2019. Below, you can check out the change in hedge fund sentiment towards CCS over the last 16 quarters. With the smart money’s capital changing hands, there exists a few key hedge fund managers who were adding to their stakes meaningfully (or already accumulated large positions).

As industrywide interest jumped, key hedge funds were breaking ground themselves. Driehaus Capital, managed by Richard Driehaus, initiated the biggest position in Century Communities, Inc (NYSE:CCS). Driehaus Capital had $4.7 million invested in the company at the end of the quarter. Ken Griffin’s Citadel Investment Group also initiated a $2.7 million position during the quarter. The other funds with new positions in the stock are Peter Muller’s PDT Partners, Israel Englander’s Millennium Management, and Michael Gelband’s ExodusPoint Capital.

As you can see these stocks had an average of 7.75 hedge funds with bullish positions and the average amount invested in these stocks was $20 million. That figure was $138 million in CCS’s case. Systemax Inc. (NYSE:SYX) is the most popular stock in this table. On the other hand Golar LNG Partners LP (NASDAQ:GMLP) is the least popular one with only 6 bullish hedge fund positions. Compared to these stocks Century Communities, Inc (NYSE:CCS) is more popular among hedge funds. Our calculations showed that top 20 most popular stocks among hedge funds returned 24.4% in 2019 through September 30th and outperformed the S&P 500 ETF (SPY) by 4 percentage points. Hedge funds were also right about betting on CCS as the stock returned 15.2% during Q3 and outperformed the market by an even larger margin. Hedge funds were clearly right about piling into this stock relative to other stocks with similar market capitalizations.