Canadian Imperial Bank of Commerce (NYSE:CM) shareholders have witnessed an increase in support from the world’s most elite money managers recently. CM was in 14 hedge funds’ portfolios at the end of the third quarter of 2018. There were 12 hedge funds in our database with CM holdings at the end of the previous quarter. Our calculations also showed that cm isn’t among the 30 most popular stocks among hedge funds.

What does the smart money think about Canadian Imperial Bank of Commerce (NYSE:CM)?

Heading into the fourth quarter of 2018, a total of 14 of the hedge funds tracked by Insider Monkey were long this stock, a change of 17% from the second quarter of 2018. On the other hand, there were a total of 17 hedge funds with a bullish position in CM at the beginning of this year. With the smart money’s sentiment swirling, there exists a select group of noteworthy hedge fund managers who were upping their holdings meaningfully (or already accumulated large positions). 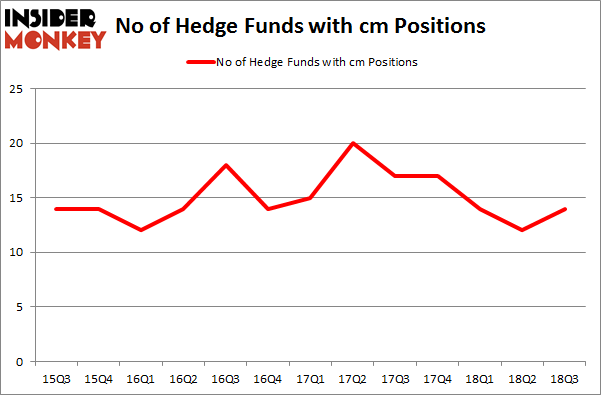 The largest stake in Canadian Imperial Bank of Commerce (NYSE:CM) was held by Arrowstreet Capital, which reported holding $166.5 million worth of stock at the end of September. It was followed by AQR Capital Management with a $127.8 million position. Other investors bullish on the company included Renaissance Technologies, Two Sigma Advisors, and Bridgewater Associates.

With a general bullishness amongst the heavyweights, key money managers were breaking ground themselves. Arrowstreet Capital, managed by Peter Rathjens, Bruce Clarke and John Campbell, established the biggest position in Canadian Imperial Bank of Commerce (NYSE:CM). Arrowstreet Capital had $166.5 million invested in the company at the end of the quarter. Jeffrey Talpins’s Element Capital Management also initiated a $1 million position during the quarter. The other funds with brand new CM positions are George Zweig, Shane Haas and Ravi Chander’s Signition LP and Michael Platt and William Reeves’s BlueCrest Capital Mgmt..

As you can see these stocks had an average of 59 hedge funds with bullish positions and the average amount invested in these stocks was $7.42 billion. That figure was $496 million in CM’s case. Altaba Inc. (NASDAQ:AABA) is the most popular stock in this table. On the other hand Baxter International Inc. (NYSE:BAX) is the least popular one with only 43 bullish hedge fund positions. Compared to these stocks Canadian Imperial Bank of Commerce (NYSE:CM) is even less popular than BAX. Considering that hedge funds aren’t fond of this stock in relation to other companies analyzed in this article, it may be a good idea to analyze it in detail and understand why the smart money isn’t behind this stock. This isn’t necessarily bad news. Although it is possible that hedge funds may think the stock is overpriced and view the stock as a short candidate, they may not be very familiar with the bullish thesis. In either case more research is warranted.