We know that hedge funds generate strong, risk-adjusted returns over the long run, therefore imitating the picks that they are collectively bullish on can be a profitable strategy for retail investors. With billions of dollars in assets, smart money investors have to conduct complex analyses, spend many resources and use tools that are not always available for the general crowd. This doesn’t mean that they don’t have occasional colossal losses; they do (like Peltz’s recent General Electric losses). However, it is still a good idea to keep an eye on hedge fund activity. With this in mind, as the current round of 13F filings has just ended, let’s examine the smart money sentiment towards Amplify Energy Corp. (NYSE:AMPY).

Is Amplify Energy Corp. (NYSE:AMPY) a bargain? Money managers are buying. The number of bullish hedge fund positions moved up by 22 in recent months. Our calculations also showed that AMPY isn’t among the 30 most popular stocks among hedge funds (click for Q3 rankings and see the video below for Q2 rankings).

In the eyes of most stock holders, hedge funds are viewed as unimportant, outdated investment vehicles of years past. While there are more than 8000 funds in operation today, Our experts look at the bigwigs of this group, approximately 750 funds. Most estimates calculate that this group of people oversee the majority of the hedge fund industry’s total asset base, and by following their finest stock picks, Insider Monkey has found a few investment strategies that have historically surpassed the S&P 500 index. Insider Monkey’s flagship short hedge fund strategy outpaced the S&P 500 short ETFs by around 20 percentage points per annum since its inception in May 2014. Our portfolio of short stocks lost 27.8% since February 2017 (through November 21st) even though the market was up more than 39% during the same period. We just shared a list of 7 short targets in our latest quarterly update .

We leave no stone unturned when looking for the next great investment idea. For example Europe is set to become the world’s largest cannabis market, so we check out this European marijuana stock pitch. One of the most bullish analysts in America just put his money where his mouth is. He says, “I’m investing more today than I did back in early 2009.” So we check out his pitch. We read hedge fund investor letters and listen to stock pitches at hedge fund conferences. We also rely on the best performing hedge funds‘ buy/sell signals. We’re going to take a glance at the fresh hedge fund action encompassing Amplify Energy Corp. (NYSE:AMPY).

How have hedgies been trading Amplify Energy Corp. (NYSE:AMPY)? 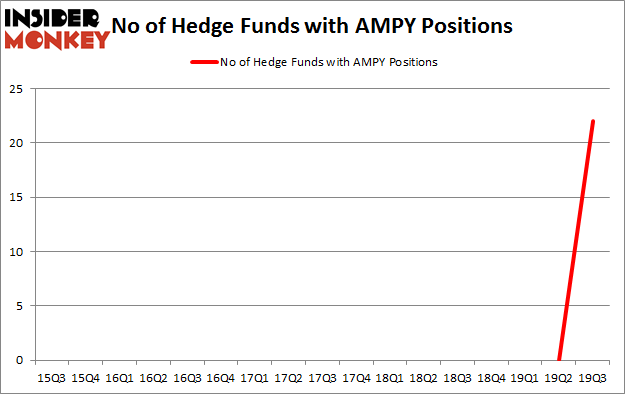 The largest stake in Amplify Energy Corp. (NYSE:AMPY) was held by Fir Tree, which reported holding $67.3 million worth of stock at the end of September. It was followed by Brigade Capital with a $28.1 million position. Other investors bullish on the company included Rubric Capital Management, Oaktree Capital Management, and Arrowstreet Capital. In terms of the portfolio weights assigned to each position Fir Tree allocated the biggest weight to Amplify Energy Corp. (NYSE:AMPY), around 6.56% of its 13F portfolio. Brigade Capital is also relatively very bullish on the stock, earmarking 1.51 percent of its 13F equity portfolio to AMPY.

Consequently, key money managers were leading the bulls’ herd. Fir Tree, managed by Jeffrey Tannenbaum, established the most valuable position in Amplify Energy Corp. (NYSE:AMPY). Fir Tree had $67.3 million invested in the company at the end of the quarter. Don Morgan’s Brigade Capital also made a $28.1 million investment in the stock during the quarter. The other funds with brand new AMPY positions are David Rosen’s Rubric Capital Management, Howard Marks’s Oaktree Capital Management, and Peter Rathjens, Bruce Clarke and John Campbell’s Arrowstreet Capital.

Let’s now take a look at hedge fund activity in other stocks – not necessarily in the same industry as Amplify Energy Corp. (NYSE:AMPY) but similarly valued. We will take a look at Atlantic Power Corporation (NYSE:AT), Cincinnati Bell Inc. (NYSE:CBB), On Deck Capital Inc (NYSE:ONDK), and Global Water Resources, Inc. (NASDAQ:GWRS). All of these stocks’ market caps are similar to AMPY’s market cap.

As you can see these stocks had an average of 10.75 hedge funds with bullish positions and the average amount invested in these stocks was $35 million. That figure was $114 million in AMPY’s case. On Deck Capital Inc (NYSE:ONDK) is the most popular stock in this table. On the other hand Global Water Resources, Inc. (NASDAQ:GWRS) is the least popular one with only 4 bullish hedge fund positions. Compared to these stocks Amplify Energy Corp. (NYSE:AMPY) is more popular among hedge funds. Our calculations showed that top 20 most popular stocks among hedge funds returned 37.4% in 2019 through the end of November and outperformed the S&P 500 ETF (SPY) by 9.9 percentage points. Unfortunately AMPY wasn’t nearly as popular as these 20 stocks and hedge funds that were betting on AMPY were disappointed as the stock returned -10.9% during the first two months of the fourth quarter and underperformed the market. If you are interested in investing in large cap stocks with huge upside potential, you should check out the top 20 most popular stocks among hedge funds as 70 percent of these stocks already outperformed the market in Q4.