Legendary investors such as Jeffrey Talpins and Seth Klarman earn enormous amounts of money for themselves and their investors by doing in-depth research on small-cap stocks that big brokerage houses don’t publish. Small cap stocks -especially when they are screened well- can generate substantial outperformance versus a boring index fund. That’s why we analyze the activity of those elite funds in these small-cap stocks. In the following paragraphs, we analyze Agilent Technologies Inc. (NYSE:A) from the perspective of those elite funds.

Agilent Technologies Inc. (NYSE:A) was in 41 hedge funds’ portfolios at the end of the first quarter of 2019. A has seen an increase in support from the world’s most elite money managers of late. There were 40 hedge funds in our database with A positions at the end of the previous quarter. Our calculations also showed that a isn’t among the 30 most popular stocks among hedge funds.

To most traders, hedge funds are viewed as worthless, old financial tools of yesteryear. While there are more than 8000 funds with their doors open at the moment, We hone in on the elite of this group, about 750 funds. It is estimated that this group of investors shepherd most of all hedge funds’ total asset base, and by paying attention to their first-class equity investments, Insider Monkey has figured out a number of investment strategies that have historically outpaced Mr. Market. Insider Monkey’s flagship hedge fund strategy beat the S&P 500 index by around 5 percentage points per annum since its inception in May 2014 through the end of May. We were able to generate large returns even by identifying short candidates. Our portfolio of short stocks lost 30.9% since February 2017 (through May 30th) even though the market was up nearly 24% during the same period. We just shared a list of 5 short targets in our latest quarterly update and they are already down an average of 11.9% in less than a couple of weeks whereas our long picks outperformed the market by 2 percentage points in this volatile 2 week period. 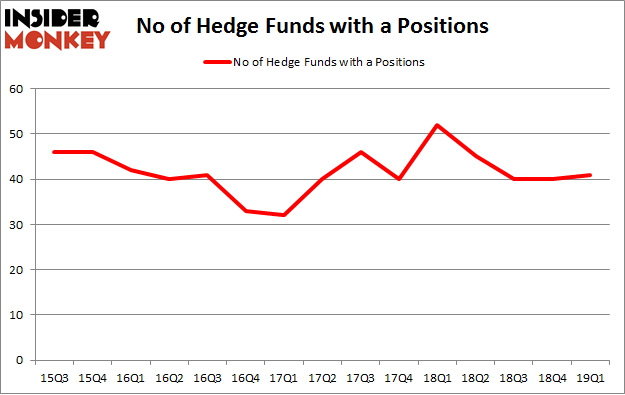 With a general bullishness amongst the heavyweights, some big names were breaking ground themselves. Polar Capital, managed by Brian Ashford-Russell and Tim Woolley, initiated the most outsized position in Agilent Technologies Inc. (NYSE:A). Polar Capital had $50 million invested in the company at the end of the quarter. Christopher James’s Partner Fund Management also initiated a $22.6 million position during the quarter. The other funds with brand new A positions are Peter Muller’s PDT Partners, Vishal Saluja and Pham Quang’s Endurant Capital Management, and Bruce Kovner’s Caxton Associates LP.

As you can see these stocks had an average of 46 hedge funds with bullish positions and the average amount invested in these stocks was $1579 million. That figure was $2099 million in A’s case. Spotify Technology S.A. (NYSE:SPOT) is the most popular stock in this table. On the other hand AutoZone, Inc. (NYSE:AZO) is the least popular one with only 42 bullish hedge fund positions. Compared to these stocks Agilent Technologies Inc. (NYSE:A) is even less popular than AZO. Hedge funds dodged a bullet by taking a bearish stance towards A. Our calculations showed that the top 15 most popular hedge fund stocks returned 1.9% in Q2 through May 30th and outperformed the S&P 500 ETF (SPY) by more than 3 percentage points. Unfortunately A wasn’t nearly as popular as these 20 stocks (hedge fund sentiment was very bearish); A investors were disappointed as the stock returned -16.6% during the same time frame and underperformed the market. If you are interested in investing in large cap stocks with huge upside potential, you should check out the top 20 most popular stocks among hedge funds as 13 of these stocks already outperformed the market so far in the second quarter.