Market volatility has picked up again over the past few weeks. Headlines highlight risks regarding interest rates, the Fed, China, house prices, auto sales, trade wars, and more. Uncertainty abounds. But doesn’t it always? I have no view on whether the recent volatility will continue for a while, or whether the market will be back at all-time highs before we know it. I remain focused on preserving and growing our capital, and continue to believe that the best way to do so is via a value-driven, concentrated, patient approach. I shun consensus holdings, rich valuations, and market fads, in favor of solid, yet frequently off-the-beaten-path, businesses run by excellent, aligned management teams, purchased at deep discounts to intrinsic value,” are the words of Maran Capital’s Dan Roller. His stock picks have been beating the S&P 500 Index handily. We pay attention to what hedge funds are doing in a particular stock before considering a potential investment because it works for us. So let’s take a glance at the smart money sentiment towards EQT Corporation (NYSE:EQT) and see how it was affected.

Hedge fund ownership of EQT dipped in the second quarter, as several funds sold off the stock, including Daniel Och’s OZ Management. Nonetheless, they remain overweight the stock, with 40 hedge funds tracked by Insider Monkey owning 17.7% of EQT’s shares, thanks in no small part to D.E. Shaw’s 8.91 million shares. Those EQT shares are down by 39% in 2018 and 22% in the last month, hitting 8-year lows. The natural gas producer was forced to cut its production estimates earlier this year and widely missed earnings estimates in Q3, falling $0.07 short. The discounted shares were too much to pass up for SVP and CFO Robert Joseph McNally, who bought 15,800 shares, a transaction that ranked 14th on our list of The 25 Biggest Insider Purchases in October.

Today there are dozens of signals market participants can use to analyze publicly traded companies. Some of the most underrated signals are hedge fund and insider trading activity. We have shown that, historically, those who follow the top picks of the top fund managers can outperform the market by a significant amount (see the details here).

At Q3’s end, a total of 40 of the hedge funds tracked by Insider Monkey were long this stock, a drop of 17% from one quarter earlier. By comparison, 30 hedge funds held shares or bullish call options in EQT in the middle of 2017, so hedge funds are still far more bullish now. With hedgies’ sentiment swirling, there exists an “upper tier” of key hedge fund managers who were upping their holdings considerably (or already accumulated large positions). 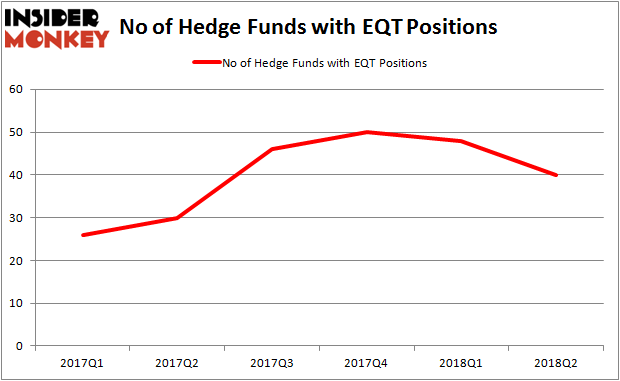 The largest stake in EQT Corporation (NYSE:EQT) was held by D E Shaw, founded by David E. Shaw, which reported holding $491.8 million worth of stock at the end of June. It was followed by Kensico Capital with a $434.3 million position. Other investors bullish on the company included Beach Point Capital Management, Firefly Value Partners, and Talara Capital Management.

Judging by the fact that EQT Corporation (NYSE:EQT) has faced a decline in interest from hedge fund managers, it’s easy to see that there lies a certain “tier” of money managers that slashed their positions entirely in the second quarter. Interestingly, Daniel S. Och’s OZ Management dropped the biggest investment of all the hedgies followed by Insider Monkey, comprising an estimated $94.3 million in call options. Kenneth Mario Garschina’s fund, Mason Capital Management, also said goodbye to its call options, about $81.7 million worth. These bearish behaviors are intriguing to say the least, as total hedge fund interest fell by 8 funds in the second quarter.

As you can see these stocks had an average of 24 hedge funds with bullish positions and the average amount invested in these stocks was $650 million. That figure was $2.59 billion in EQT’s case. FMC Technologies, Inc. (NYSE:FTI) is the most popular stock in this table. On the other hand Atlassian Corporation Plc (NASDAQ:TEAM) is the least popular one with only 21 bullish hedge fund positions. Compared to these stocks EQT Corporation (NYSE:EQT) is more popular among hedge funds. Considering that hedge funds are very fond of this stock in relation to its market cap peers and insiders are also buying up shares, it may be a good idea to analyze it in detail and potentially include it in your portfolio.