Hedge funds are not perfect. They have their bad picks just like everyone else. Facebook, a stock hedge funds have loved, lost a third of its value since the end of July. Although hedge funds are not perfect, their consensus picks do deliver solid returns, however. Our data show the top 30 S&P 500 stocks among hedge funds at the end of September 2018 yielded an average return of 6.7% year-to-date, vs. a gain of 2.6% for the S&P 500 Index. Because hedge funds have a lot of resources and their consensus picks do well, we pay attention to what they think. In this article, we analyze what the elite funds think of Shire PLC (NASDAQ:SHPG).

Is Shire PLC (NASDAQ:SHPG) a bargain? Hedge funds are becoming more confident. The number of bullish hedge fund bets inched up by 12 recently. Nonetheless, our calculations showed that SHPG isn’t among the 30 most popular stocks among hedge funds, though it fared better among billionaire investors, ranking 15th among the 30 Stocks Billionaires Are Crazy About: Insider Monkey Billionaire Stock Index.

At Q3’s end, a total of 68 of the hedge funds tracked by Insider Monkey held long positions in this stock, a rise of 21% from one quarter earlier. Below, you can check out the change in hedge fund sentiment towards SHPG over the last 13 quarters. With hedgies’ positions undergoing their usual ebb and flow, there exists a few noteworthy hedge fund managers who were boosting their holdings meaningfully (or already accumulated large positions). 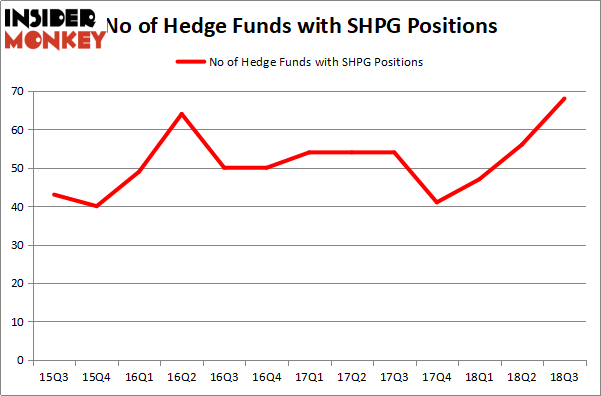 Among these funds, Adage Capital Management held the most valuable stake in Shire PLC (NASDAQ:SHPG), which was worth $580.1 million at the end of the third quarter. On the second spot was Glenview Capital which amassed $531.5 million worth of shares. Moreover, Paulson & Co, Abrams Capital Management, and Sachem Head Capital were also bullish on Shire PLC (NASDAQ:SHPG), allocating a large percentage of their portfolios to this stock.

With a general bullishness amongst the heavyweights, specific money managers were breaking ground themselves. Abrams Capital Management, managed by David Abrams, assembled the most outsized position in Shire PLC (NASDAQ:SHPG). Abrams Capital Management had $407.3 million invested in the company at the end of the quarter. Dan Loeb’s Third Point also made a $290 million investment in the stock during the quarter. The following funds were also among the new SHPG investors: Daniel S. Och’s OZ Management, Isaac Corre’s Governors Lane, and Jeffrey Tannenbaum’s Fir Tree.

As you can see these stocks had an average of 40 hedge funds with bullish positions and the average amount invested in these stocks was $2.77 billion. That figure was $6.06 billion in SHPG’s case. Express Scripts Holding Company (NASDAQ:ESRX) is the most popular stock in this table. On the other hand America Movil SAB de CV (NYSE:AMX) is the least popular one with only 10 bullish hedge fund positions. Shire PLC (NASDAQ:SHPG) is not the most popular stock in this group but hedge fund interest is still above average. This is a slightly positive signal but we’d rather spend our time researching stocks that hedge funds are piling on. In this regard ESRX might be a better candidate to consider a long position.