We can judge whether SemGroup Corporation (NYSE:SEMG) is a good investment right now by following the lead of some of the best investors in the world and piggybacking their ideas. There’s no better way to get these firms’ immense resources and analytical capabilities working for us than to follow their lead into their best ideas. While not all of these picks will be winners, our research shows that these picks historically outperformed the market when we factor in known risk factors.

Is SemGroup Corporation (NYSE:SEMG) a superb stock to buy now? The best stock pickers are buying. The number of long hedge fund bets inched up by 2 in recent months. Our calculations also showed that SEMG isn’t among the 30 most popular stocks among hedge funds (see the video below). 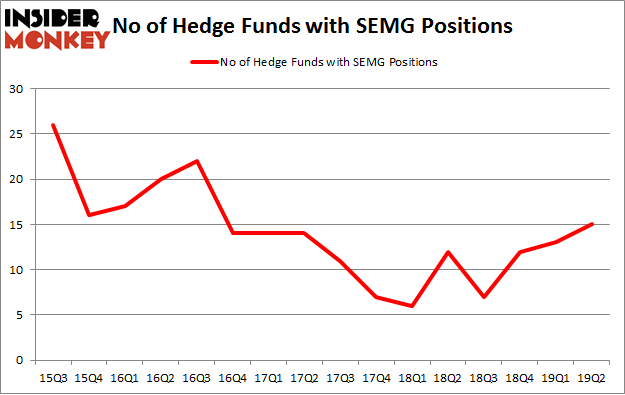 Now, key hedge funds were leading the bulls’ herd. Point72 Asset Management, managed by Steve Cohen, initiated the biggest position in SemGroup Corporation (NYSE:SEMG). Point72 Asset Management had $15.2 million invested in the company at the end of the quarter. Stuart J. Zimmer’s Zimmer Partners also made a $7.3 million investment in the stock during the quarter. The other funds with new positions in the stock are Michael Gelband’s ExodusPoint Capital, Jonathan Soros’s JS Capital, and Thiru Ramakrishnan’s TVR Capital.

Let’s now review hedge fund activity in other stocks – not necessarily in the same industry as SemGroup Corporation (NYSE:SEMG) but similarly valued. We will take a look at National Western Life Group, Inc.(NASDAQ:NWLI), The Greenbrier Companies, Inc. (NYSE:GBX), Pacific Biosciences of California, Inc. (NASDAQ:PACB), and Gannett Co., Inc. (NYSE:GCI). All of these stocks’ market caps are similar to SEMG’s market cap.

As you can see these stocks had an average of 14.5 hedge funds with bullish positions and the average amount invested in these stocks was $79 million. That figure was $65 million in SEMG’s case. Pacific Biosciences of California, Inc. (NASDAQ:PACB) is the most popular stock in this table. On the other hand National Western Life Group, Inc. (NASDAQ:NWLI) is the least popular one with only 8 bullish hedge fund positions. SemGroup Corporation (NYSE:SEMG) is not the most popular stock in this group but hedge fund interest is still above average. Our calculations showed that top 20 most popular stocks among hedge funds returned 24.4% in 2019 through September 30th and outperformed the S&P 500 ETF (SPY) by 4 percentage points. Hedge funds were also right about betting on SEMG as the stock returned 43% during the third quarter and outperformed the market. Hedge funds were rewarded for their relative bullishness.