Concerns over rising interest rates and expected further rate increases have hit several stocks hard since the end of the third quarter. NASDAQ and Russell 2000 indices are already in correction territory. More importantly, Russell 2000 ETF (IWM) underperformed the larger S&P 500 ETF (SPY) by about 4 percentage points in the first half of the fourth quarter. Hedge funds and institutional investors tracked by Insider Monkey usually invest a disproportionate amount of their portfolios in smaller cap stocks. We have been receiving indications that hedge funds were paring back their overall exposure and this is one of the factors behind the recent movements in major indices. In this article, we will take a closer look at hedge fund sentiment towards Phillips 66 (NYSE:PSX).

Hedge funds are growing a lot more bullish on Phillips 66, with the number of smart money shareholders of the stock jumping by 43% over the past two quarters. While that wasn’t enough to land PSX on our ranking of the 30 Most Popular Stocks Among Hedge Funds, it does have numerous bulls among the billionaires tracked by our database, including Warren Buffett, ranking 14th among the 20 Dividend Stocks That Billionaires Are Piling On.

What have hedge funds been doing with Phillips 66 (NYSE:PSX)? 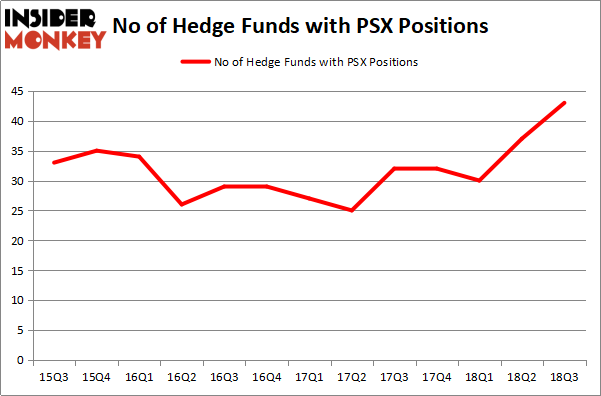 When looking at the institutional investors followed by Insider Monkey, Warren Buffett’s Berkshire Hathaway has the largest position in Phillips 66 (NYSE:PSX), worth close to $1.74 billion, comprising 0.8% of its total 13F portfolio. The second largest stake is held by Peter Rathjens, Bruce Clarke and John Campbell of Arrowstreet Capital, with a $297.3 million position; 0.7% of its 13F portfolio is allocated to the stock. Some other peers that hold long positions encompass Cliff Asness’ AQR Capital Management, Israel Englander’s Millennium Management and Jim Simons’ Renaissance Technologies.

Let’s also examine hedge fund activity in other stocks – not necessarily in the same industry as Phillips 66 (NYSE:PSX) but similarly valued. We will take a look at The Bank of New York Mellon Corporation (NYSE:BK), CIGNA Corporation (NYSE:CI), Norfolk Southern Corp. (NYSE:NSC), and ING Groep N.V. (NYSE:ING). All of these stocks’ market caps are similar to PSX’s market cap.

As you can see these stocks had an average of 39 hedge funds with bullish positions and the average amount invested in these stocks was $2.97 billion. That figure was $3.18 billion in PSX’s case. CIGNA Corporation (NYSE:CI) is the most popular stock in this table. On the other hand ING Groep N.V. (NYSE:ING) is the least popular one with only 8 bullish hedge fund positions. Phillips 66 (NYSE:PSX) is not the most popular stock in this group but hedge fund interest is still above average. This is a slightly positive signal but we’d rather spend our time researching stocks that hedge funds are really bullish on right now, like CI.