MicroStrategy Incorporated (NASDAQ:MSTR) investors should be aware of an increase in activity from the world’s largest hedge funds of late. MSTR was in 25 hedge funds’ portfolios at the end of the third quarter of 2018. There were 20 hedge funds in our database with MSTR holdings at the end of the previous quarter. Our calculations also showed that MSTR isn’t among the 30 most popular stocks among hedge funds. 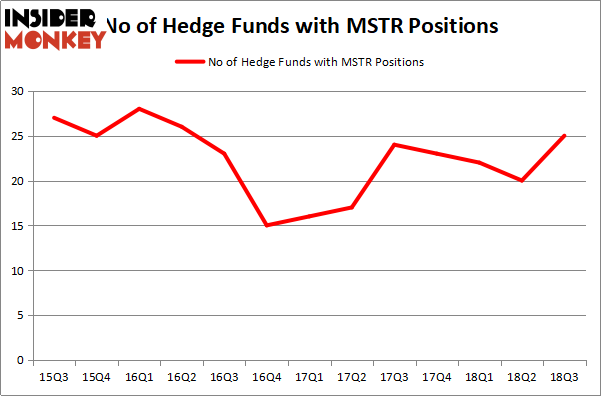 The largest stake in MicroStrategy Incorporated (NASDAQ:MSTR) was held by Eminence Capital, which reported holding $57.6 million worth of stock at the end of September. It was followed by GLG Partners with a $26.9 million position. Other investors bullish on the company included D E Shaw, Echo Street Capital Management, and Laurion Capital Management.

Consequently, key hedge funds were breaking ground themselves. Laurion Capital Management, managed by Benjamin A. Smith, created the biggest position in MicroStrategy Incorporated (NASDAQ:MSTR). Laurion Capital Management had $14 million invested in the company at the end of the quarter. Jonathan Barrett and Paul Segal’s Luminus Management also made a $4.1 million investment in the stock during the quarter. The other funds with new positions in the stock are Paul Marshall and Ian Wace’s Marshall Wace LLP, Matthew Hulsizer’s PEAK6 Capital Management, and Peter Muller’s PDT Partners.

As you can see these stocks had an average of 14.5 hedge funds with bullish positions and the average amount invested in these stocks was $163 million. That figure was $232 million in MSTR’s case. Skyline Champion Corporation (NYSE:SKY) is the most popular stock in this table. On the other hand Nexa Resources S.A. (NYSE:NEXA) is the least popular one with only 9 bullish hedge fund positions. Compared to these stocks MicroStrategy Incorporated (NASDAQ:MSTR) is more popular among hedge funds. Considering that hedge funds are fond of this stock in relation to its market cap peers, it may be a good idea to analyze it in detail and potentially include it in your portfolio.

Is PotlatchDeltic Corporation (PCH) A Good Stock To Buy?
Monthly Newsletter Strategy
Download a free copy of our newsletter and see the details inside!
Hedge Fund Resource Center
Related News
Hedge Funds Love MicroStrategy Incorporated (MSTR), But Not Quite As Much Fidelity National Information Services (FIS), Inphi Corporation (IPHI) & Two More: Did Maplelane Capital’s Picks Live Up to the Hype? Sirius XM Holdings Inc. (SIRI), HubSpot Inc (HUBS), More: Are These Stocks About To Jump Higher? Hedge Funds Are Dumping MicroStrategy Incorporated (MSTR) Want to Invest Like a Hedge Fund? Have a Look at These 3 Stocks Favored by Top Money Managers What Is Going On With These 4 Falling Stocks? Apex Capital’s Top Tech Picks For Q2 The 10 Best Islands to Visit in 2019 5 Most Socially Responsible Companies in America 5 Ways You Can Eliminate Credit Card Debt
Billionaire Hedge Funds