We can judge whether Liberty Broadband Corp (NASDAQ:LBRDK) is a good investment right now by following the lead of some of the best investors in the world and piggybacking their ideas. There’s no better way to get these firms’ immense resources and analytical capabilities working for us than to follow their lead into their best ideas. While not all of these picks will be winners, research shows that these picks historically outperformed the market when we factor in known risk factors.

Liberty Broadband Corp (NASDAQ:LBRDK) shareholders have witnessed an increase in enthusiasm from smart money in recent months. LBRDK was in 37 hedge funds’ portfolios at the end of September. There were 34 hedge funds in our database with LBRDK holdings at the end of the previous quarter. Our calculations also showed that LBRDK isn’t among the 30 most popular stocks among hedge funds.

If you’d ask most investors, hedge funds are viewed as slow, old investment vehicles of the past. While there are more than 8,000 funds in operation today, Our researchers choose to focus on the upper echelon of this group, around 700 funds. These money managers control the majority of all hedge funds’ total asset base, and by tailing their unrivaled equity investments, Insider Monkey has determined a few investment strategies that have historically outpaced the S&P 500 index. Insider Monkey’s flagship hedge fund strategy surpassed the S&P 500 index by 6 percentage points a year since its inception in May 2014 through early November 2018. We were able to generate large returns even by identifying short candidates. Our portfolio of short stocks lost 24% since February 2017 (through December 3rd) even though the market was up nearly 23% during the same period. We just shared a list of 11 short targets in our latest quarterly update.

How have hedgies been trading Liberty Broadband Corp (NASDAQ:LBRDK)?

At Q3’s end, a total of 37 of the hedge funds tracked by Insider Monkey were long this stock, a change of 9% from one quarter earlier. On the other hand, there were a total of 50 hedge funds with a bullish position in LBRDK at the beginning of this year. With hedge funds’ positions undergoing their usual ebb and flow, there exists a select group of key hedge fund managers who were adding to their holdings significantly (or already accumulated large positions). 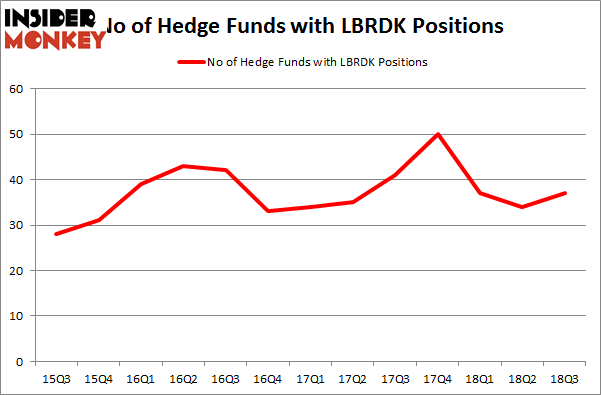 The largest stake in Liberty Broadband Corp (NASDAQ:LBRDK) was held by Coatue Management, which reported holding $729.6 million worth of stock at the end of September. It was followed by Soros Fund Management with a $614.6 million position. Other investors bullish on the company included Eagle Capital Management, SQ Advisors, and Hound Partners.

Consequently, specific money managers were breaking ground themselves. Atalan Capital, managed by David Thomas, established the most valuable position in Liberty Broadband Corp (NASDAQ:LBRDK). Atalan Capital had $24.4 million invested in the company at the end of the quarter. Stephen J. Errico’s Locust Wood Capital Advisers also made a $12.1 million investment in the stock during the quarter. The other funds with brand new LBRDK positions are John Shapiro’s Chieftain Capital, Jorge Paulo Lemann’s 3G Capital, and Noam Gottesman’s GLG Partners.

As you can see these stocks had an average of 25.5 hedge funds with bullish positions and the average amount invested in these stocks was $1.16 billion. That figure was $3.46 billion in LBRDK’s case. Citrix Systems, Inc. (NASDAQ:CTXS) is the most popular stock in this table. On the other hand Omnicom Group Inc. (NYSE:OMC) is the least popular one with only 19 bullish hedge fund positions. Liberty Broadband Corp (NASDAQ:LBRDK) is not the most popular stock in this group but hedge fund interest is still above average. This is a slightly positive signal but we’d rather spend our time researching stocks that hedge funds are piling on. In this regard CTXS might be a better candidate to consider a long position.