In these volatile markets we scrutinize hedge fund filings to get a reading on which direction each stock might be going. Hedge Funds and other institutional investors have just completed filing their 13Fs with the Securities and Exchange Commission, revealing their equity portfolios as of the end of June. At Insider Monkey, we follow nearly 835 active hedge funds and notable investors and by analyzing their 13F filings, we can determine the stocks that they are collectively bullish on. One of their picks is Knight Transportation Inc. (NYSE:KNX), so let’s take a closer look at the sentiment that surrounds it in the current quarter.

Knight Transportation Inc. (NYSE:KNX) was in 26 hedge funds’ portfolios at the end of December. KNX investors should be aware of an increase in hedge fund interest in recent months. There were 23 hedge funds in our database with KNX positions at the end of the previous quarter. Our calculations also showed that KNX isn’t among the 30 most popular stocks among hedge funds (click for Q4 rankings and see the video at the end of this article for Q3 rankings).

In today’s marketplace there are a multitude of methods market participants employ to grade publicly traded companies. Some of the most innovative methods are hedge fund and insider trading sentiment. Our researchers have shown that, historically, those who follow the top picks of the top investment managers can outperform the broader indices by a solid margin (see the details here).

We leave no stone unturned when looking for the next great investment idea. For example we recently identified a stock that trades 25% below the net cash on its balance sheet. We read hedge fund investor letters and listen to stock pitches at hedge fund conferences, and go through short-term trade recommendations like this one. We even check out the recommendations of services with hard to believe track records. Our best call in 2020 was shorting the market when S&P 500 was trading at 3150 after realizing the coronavirus pandemic’s significance before most investors. With all of this in mind let’s take a peek at the new hedge fund action surrounding Knight Transportation Inc. (NYSE:KNX).

What have hedge funds been doing with Knight Transportation Inc. (NYSE:KNX)? 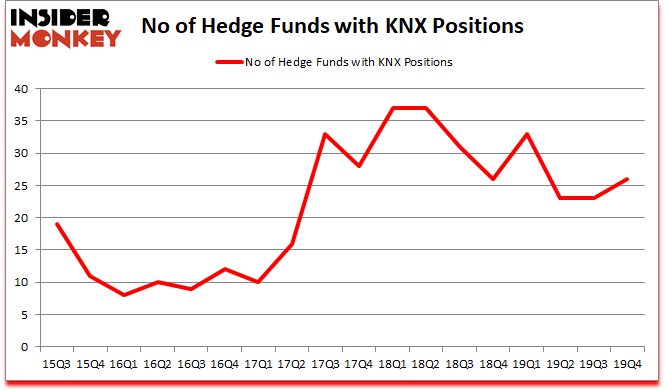 According to Insider Monkey’s hedge fund database, Ken Griffin’s Citadel Investment Group has the biggest position in Knight Transportation Inc. (NYSE:KNX), worth close to $71.9 million, comprising less than 0.1%% of its total 13F portfolio. Coming in second is Alyeska Investment Group, managed by Anand Parekh, which holds a $45 million position; the fund has 0.6% of its 13F portfolio invested in the stock. Other members of the smart money that hold long positions consist of Phill Gross and Robert Atchinson’s Adage Capital Management, Gregg Moskowitz’s Interval Partners and Brandon Haley’s Holocene Advisors. In terms of the portfolio weights assigned to each position 12th Street Asset Management allocated the biggest weight to Knight Transportation Inc. (NYSE:KNX), around 3.86% of its 13F portfolio. MIK Capital is also relatively very bullish on the stock, designating 3.54 percent of its 13F equity portfolio to KNX.

Let’s go over hedge fund activity in other stocks similar to Knight Transportation Inc. (NYSE:KNX). We will take a look at CubeSmart (NYSE:CUBE), EnCana Corporation (NYSE:ECA), Bilibili Inc. (NASDAQ:BILI), and Teladoc Inc (NYSE:TDOC). All of these stocks’ market caps are closest to KNX’s market cap.

As you can see these stocks had an average of 24 hedge funds with bullish positions and the average amount invested in these stocks was $314 million. That figure was $342 million in KNX’s case. CubeSmart (NYSE:CUBE) is the most popular stock in this table. On the other hand EnCana Corporation (NYSE:ECA) is the least popular one with only 23 bullish hedge fund positions. Knight Transportation Inc. (NYSE:KNX) is not the most popular stock in this group but hedge fund interest is still above average. Our calculations showed that top 20 most popular stocks among hedge funds returned 41.3% in 2019 and outperformed the S&P 500 ETF (SPY) by 10.1 percentage points. These stocks lost 17.4% in 2020 through March 25th but still beat the market by 5.5 percentage points. Hedge funds were also right about betting on KNX as the stock returned -10.3% during the first quarter (through March 25th) and outperformed the market. Hedge funds were rewarded for their relative bullishness.