After several tireless days we have finished crunching the numbers from nearly 750 13F filings issued by the elite hedge funds and other investment firms that we track at Insider Monkey, which disclosed those firms’ equity portfolios as of June 28. The results of that effort will be put on display in this article, as we share valuable insight into the smart money sentiment towards Hudson Pacific Properties Inc (NYSE:HPP).

Hudson Pacific Properties Inc (NYSE:HPP) shareholders have witnessed an increase in activity from the world’s largest hedge funds recently. HPP was in 17 hedge funds’ portfolios at the end of June. There were 12 hedge funds in our database with HPP positions at the end of the previous quarter. Our calculations also showed that HPP isn’t among the 30 most popular stocks among hedge funds.

To most investors, hedge funds are viewed as underperforming, outdated financial tools of the past. While there are greater than 8000 funds trading today, We hone in on the moguls of this club, around 750 funds. Most estimates calculate that this group of people watch over bulk of the hedge fund industry’s total capital, and by paying attention to their matchless investments, Insider Monkey has found numerous investment strategies that have historically surpassed the broader indices. Insider Monkey’s flagship hedge fund strategy beat the S&P 500 index by around 5 percentage points annually since its inception in May 2014. We were able to generate large returns even by identifying short candidates. Our portfolio of short stocks lost 25.7% since February 2017 (through September 30th) even though the market was up more than 33% during the same period. We just shared a list of 10 short targets in our latest quarterly update .

Unlike some fund managers who are betting on Dow reaching 40000 in a year, our long-short investment strategy doesn’t rely on bull markets to deliver double digit returns. We only rely on hedge fund buy/sell signals. We’re going to go over the fresh hedge fund action surrounding Hudson Pacific Properties Inc (NYSE:HPP).

Heading into the third quarter of 2019, a total of 17 of the hedge funds tracked by Insider Monkey were long this stock, a change of 42% from the first quarter of 2019. Below, you can check out the change in hedge fund sentiment towards HPP over the last 16 quarters. With hedgies’ capital changing hands, there exists an “upper tier” of notable hedge fund managers who were boosting their stakes meaningfully (or already accumulated large positions). 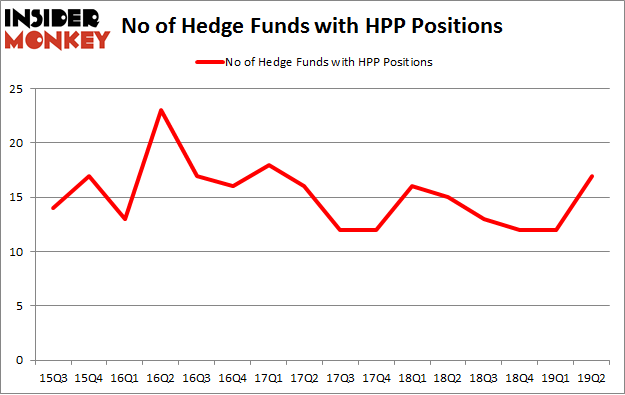 When looking at the institutional investors followed by Insider Monkey, John Khoury’s Long Pond Capital has the number one position in Hudson Pacific Properties Inc (NYSE:HPP), worth close to $174.2 million, amounting to 5.2% of its total 13F portfolio. Sitting at the No. 2 spot is Renaissance Technologies which holds a $67.2 million position; the fund has 0.1% of its 13F portfolio invested in the stock. Other peers that are bullish include Eduardo Abush’s Waterfront Capital Partners, Dmitry Balyasny’s Balyasny Asset Management and Israel Englander’s Millennium Management.

As you can see these stocks had an average of 26.25 hedge funds with bullish positions and the average amount invested in these stocks was $634 million. That figure was $320 million in HPP’s case. W.R. Grace & Co. (NYSE:GRA) is the most popular stock in this table. On the other hand United Microelectronics Corporation (NYSE:UMC) is the least popular one with only 12 bullish hedge fund positions. Hudson Pacific Properties Inc (NYSE:HPP) is not the least popular stock in this group but hedge fund interest is still below average. This is a slightly negative signal and we’d rather spend our time researching stocks that hedge funds are piling on. Our calculations showed that top 20 most popular stocks among hedge funds returned 24.4% in 2019 through September 30th and outperformed the S&P 500 ETF (SPY) by 4 percentage points. Unfortunately HPP wasn’t nearly as popular as these 20 stocks (hedge fund sentiment was quite bearish); HPP investors were disappointed as the stock returned 1.3% during the third quarter and underperformed the market. If you are interested in investing in large cap stocks with huge upside potential, you should check out the top 20 most popular stocks (view the video below) among hedge funds as many of these stocks already outperformed the market so far in 2019.