Is Hologic, Inc. (NASDAQ:HOLX) a good stock to buy right now? We at Insider Monkey like to examine what billionaires and hedge funds think of a company before spending days of research on it. Given their 2 and 20 payment structure, hedge funds have more incentives and resources than the average investor. The funds have access to expert networks and get tips from industry insiders. They also have numerous Ivy League graduates and MBAs. Like everyone else, hedge funds perform miserably at times, but their consensus picks have historically outperformed the market after risk adjustments.

Is Hologic, Inc. (NASDAQ:HOLX) a buy, sell, or hold? The smart money is getting more bullish. The number of long hedge fund bets inched up by 9 lately. Our calculations also showed that HOLX isn’t among the 30 most popular stocks among hedge funds (view the video below).

If you’d ask most stock holders, hedge funds are viewed as underperforming, outdated investment tools of yesteryear. While there are over 8000 funds in operation at present, We look at the upper echelon of this group, around 750 funds. Most estimates calculate that this group of people have their hands on the majority of the smart money’s total capital, and by tailing their top equity investments, Insider Monkey has deciphered several investment strategies that have historically defeated the broader indices. Insider Monkey’s flagship hedge fund strategy surpassed the S&P 500 index by around 5 percentage points per annum since its inception in May 2014. We were able to generate large returns even by identifying short candidates. Our portfolio of short stocks lost 25.7% since February 2017 (through September 30th) even though the market was up more than 33% during the same period. We just shared a list of 10 short targets in our latest quarterly update . 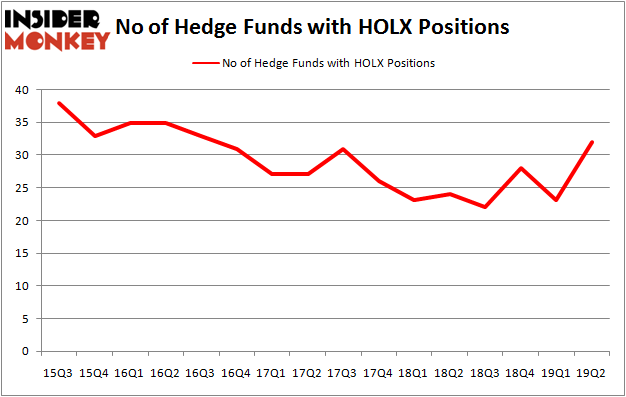 Unlike some fund managers who are betting on Dow reaching 40000 in a year, our long-short investment strategy doesn’t rely on bull markets to deliver double digit returns. We only rely on hedge fund buy/sell signals. Let’s take a look at the key hedge fund action surrounding Hologic, Inc. (NASDAQ:HOLX).

How have hedgies been trading Hologic, Inc. (NASDAQ:HOLX)?

Heading into the third quarter of 2019, a total of 32 of the hedge funds tracked by Insider Monkey were bullish on this stock, a change of 39% from the previous quarter. On the other hand, there were a total of 24 hedge funds with a bullish position in HOLX a year ago. With hedgies’ sentiment swirling, there exists an “upper tier” of noteworthy hedge fund managers who were upping their holdings considerably (or already accumulated large positions).

According to Insider Monkey’s hedge fund database, Larry Robbins’s Glenview Capital has the number one position in Hologic, Inc. (NASDAQ:HOLX), worth close to $469.4 million, amounting to 4.3% of its total 13F portfolio. Sitting at the No. 2 spot is D E Shaw, led by D. E. Shaw, holding a $73.1 million position; 0.1% of its 13F portfolio is allocated to the company. Other members of the smart money that are bullish include Steve Cohen’s Point72 Asset Management, Noam Gottesman’s GLG Partners and John Osterweis’s Osterweis Capital Management.

As aggregate interest increased, specific money managers were breaking ground themselves. Kahn Brothers, managed by Irving Kahn, created the largest position in Hologic, Inc. (NASDAQ:HOLX). Kahn Brothers had $16.3 million invested in the company at the end of the quarter. Renaissance Technologies also made a $13.9 million investment in the stock during the quarter. The following funds were also among the new HOLX investors: Ken Griffin’s Citadel Investment Group, Paul Tudor Jones’s Tudor Investment Corp, and Joel Greenblatt’s Gotham Asset Management.

As you can see these stocks had an average of 18.75 hedge funds with bullish positions and the average amount invested in these stocks was $355 million. That figure was $778 million in HOLX’s case. Expeditors International of Washington, Inc. (NASDAQ:EXPD) is the most popular stock in this table. On the other hand Cna Financial Corporation (NYSE:CNA) is the least popular one with only 12 bullish hedge fund positions. Compared to these stocks Hologic, Inc. (NASDAQ:HOLX) is more popular among hedge funds. Our calculations showed that top 20 most popular stocks among hedge funds returned 24.4% in 2019 through September 30th and outperformed the S&P 500 ETF (SPY) by 4 percentage points. Hedge funds were also right about betting on HOLX, though not to the same extent, as the stock returned 5.1% during the third quarter and outperformed the market as well.