Is Hercules Technology Growth Capital Inc (NYSE:HTGC) a buy right now? Prominent investors are taking an optimistic view. The number of bullish hedge fund bets went up by 2 lately. Our calculations also showed that HTGC isn’t among the 30 most popular stocks among hedge funds (see the video below). 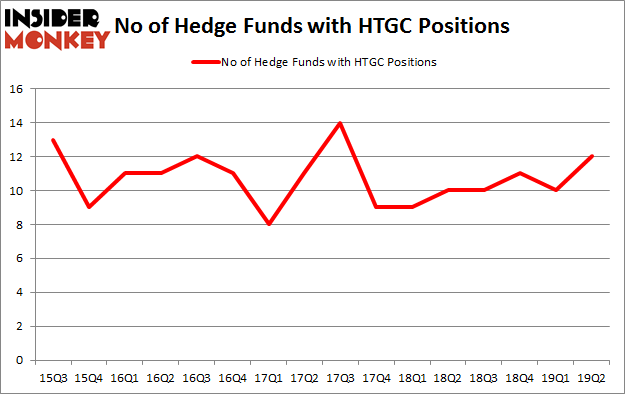 The largest stake in Hercules Technology Growth Capital Inc (NYSE:HTGC) was held by Millennium Management, which reported holding $9.5 million worth of stock at the end of March. It was followed by McKinley Capital Management with a $4.2 million position. Other investors bullish on the company included Citadel Investment Group, Polaris Capital Management, and D E Shaw.

As one would reasonably expect, specific money managers were breaking ground themselves. Two Sigma Advisors, managed by John Overdeck and David Siegel, established the largest position in Hercules Technology Growth Capital Inc (NYSE:HTGC). Two Sigma Advisors had $0.9 million invested in the company at the end of the quarter. Richard Driehaus’s Driehaus Capital also initiated a $0.9 million position during the quarter. The other funds with new positions in the stock are Alec Litowitz and Ross Laser’s Magnetar Capital, Peter Rathjens, Bruce Clarke and John Campbell’s Arrowstreet Capital, and Paul Tudor Jones’s Tudor Investment Corp.

As you can see these stocks had an average of 14.25 hedge funds with bullish positions and the average amount invested in these stocks was $176 million. That figure was $25 million in HTGC’s case. American Axle & Manufacturing Holdings, Inc. (NYSE:AXL) is the most popular stock in this table. On the other hand LendingClub Corporation (NYSE:LC) is the least popular one with only 10 bullish hedge fund positions. Hercules Technology Growth Capital Inc (NYSE:HTGC) is not the least popular stock in this group but hedge fund interest is still below average. Our calculations showed that top 20 most popular stocks among hedge funds returned 24.4% in 2019 through September 30th and outperformed the S&P 500 ETF (SPY) by 4 percentage points. A small number of hedge funds were also right about betting on HTGC as the stock returned 7.1% during the same time frame and outperformed the market by an even larger margin.