With the third-quarter round of 13F filings behind us it is time to take a look at the stocks in which some of the best money managers in the world preferred to invest or sell heading into the fourth quarter. One of these stocks was Chubb Limited (NYSE:CB).

Chubb Limited (NYSE:CB) was in 30 hedge funds’ portfolios at the end of the third quarter of 2018. CB has seen an increase in enthusiasm from smart money in recent months. There were 23 hedge funds in our database with CB positions at the end of the previous quarter. Our calculations also showed that cb isn’t among the 30 most popular stocks among hedge funds.

Heading into the fourth quarter of 2018, a total of 30 of the hedge funds tracked by Insider Monkey were bullish on this stock, a change of 30% from the previous quarter. On the other hand, there were a total of 28 hedge funds with a bullish position in CB at the beginning of this year. With hedge funds’ capital changing hands, there exists an “upper tier” of key hedge fund managers who were boosting their stakes considerably (or already accumulated large positions). 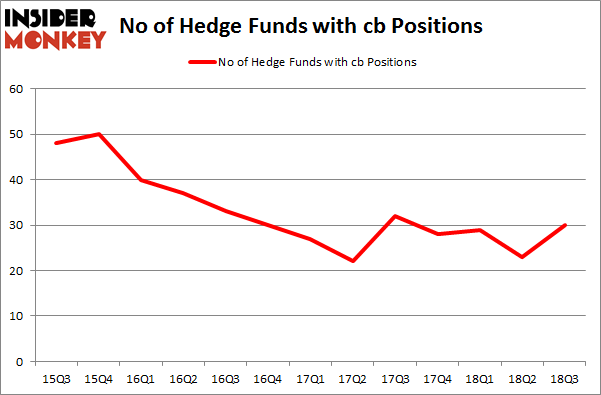 As you can see these stocks had an average of 31.25 hedge funds with bullish positions and the average amount invested in these stocks was $3.23 billion. That figure was $527 million in CB’s case. T-Mobile US, Inc. (NYSE:TMUS) is the most popular stock in this table. On the other hand Relx PLC (NYSE:RELX) is the least popular one with only 5 bullish hedge fund positions. Chubb Limited (NYSE:CB) is not the least popular stock in this group but hedge fund interest is still below average. This is a slightly negative signal and we’d rather spend our time researching stocks that hedge funds are piling on. In this regard TMUS might be a better candidate to consider a long position.

Should You Buy Match Group, Inc. (MTCH)?
Monthly Newsletter Strategy
Download a free copy of our newsletter and see the details inside!
Hedge Fund Resource Center
Related News
10 Largest Property and Casualty Insurance Companies in 2018 76 Best Insurance Dividend Stocks To Invest In 10 Most Successful Holding Companies in the US Is Chubb Ltd (CB) a Good Stock to Buy? Seed Giant Monsanto and Mineral Development Company Witness Intriguing Insider Buying, Plus the Latest Insider Trading Developments at 3 Other Companies Scout Daily Update: Hurricane Matthew Takes Aim For Florida Billionaires Are Betting on These Five Insurers The 10 Best Islands to Visit in 2019 5 Most Socially Responsible Companies in America 5 Ways You Can Eliminate Credit Card Debt
Billionaire Hedge Funds