Is Ambarella Inc. (NASDAQ:AMBA) a good equity to bet on right now? We like to check what the smart money thinks first before doing extensive research on a given stock. Although there have been several high profile failed hedge fund picks, the consensus picks among hedge fund investors have historically outperformed the market after adjusting for known risk attributes. It’s not surprising given that hedge funds have access to better information and more resources to predict the winners in the stock market.

Is Ambarella Inc. (NASDAQ:AMBA) a first-rate stock to buy now? Hedge funds are taking a bullish view. The number of long hedge fund bets inched up by 2 lately. Our calculations also showed that AMBA isn’t among the 30 most popular stocks among hedge funds (see the video below). AMBA was in 21 hedge funds’ portfolios at the end of June. There were 19 hedge funds in our database with AMBA positions at the end of the previous quarter.

What have hedge funds been doing with Ambarella Inc. (NASDAQ:AMBA)? 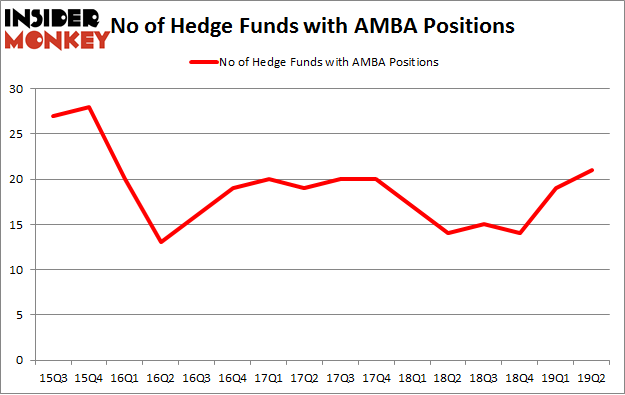 More specifically, Citadel Investment Group was the largest shareholder of Ambarella Inc. (NASDAQ:AMBA), with a stake worth $34.6 million reported as of the end of March. Trailing Citadel Investment Group was Renaissance Technologies, which amassed a stake valued at $16.8 million. Columbus Circle Investors, D E Shaw, and Potrero Capital Research were also very fond of the stock, giving the stock large weights in their portfolios.

As one would reasonably expect, specific money managers have been driving this bullishness. D E Shaw, managed by D. E. Shaw, initiated the most valuable position in Ambarella Inc. (NASDAQ:AMBA). D E Shaw had $11.4 million invested in the company at the end of the quarter. Peter A. Wright’s P.A.W. CAPITAL PARTNERS also initiated a $1.8 million position during the quarter. The other funds with brand new AMBA positions are Paul Tudor Jones’s Tudor Investment Corp, Frank Slattery’s Symmetry Peak Management, and Chuck Royce’s Royce & Associates.

As you can see these stocks had an average of 14.25 hedge funds with bullish positions and the average amount invested in these stocks was $266 million. That figure was $121 million in AMBA’s case. Crocs, Inc. (NASDAQ:CROX) is the most popular stock in this table. On the other hand trivago N.V. (NASDAQ:TRVG) is the least popular one with only 9 bullish hedge fund positions. Ambarella Inc. (NASDAQ:AMBA) is not the most popular stock in this group but hedge fund interest is still above average. Our calculations showed that top 20 most popular stocks among hedge funds returned 24.4% in 2019 through September 30th and outperformed the S&P 500 ETF (SPY) by 4 percentage points. Hedge funds were also right about betting on AMBA as the stock returned 42.4% during the third quarter and outperformed the market. Hedge funds were rewarded for their relative bullishness.