Like everyone else, elite investors make mistakes. Some of their top consensus picks, such as Amazon, Facebook and Alibaba, have not done well in Q4 due to various reasons. Nevertheless, the data show elite investors’ consensus picks have done well on average over the long-term. The top 15 S&P 500 stocks among hedge funds at the end of September 2018 returned an average of 1% through March 15th whereas the S&P 500 Index ETF lost 2.2% during the same period. Because their consensus picks have done well, we pay attention to what elite funds think before doing extensive research on a stock. In this article, we take a closer look at Aluminum Corp. of China Limited (NYSE:ACH) from the perspective of those elite funds.

Aluminum Corp. of China Limited (NYSE:ACH) investors should be aware of an increase in hedge fund interest recently. ACH was in 4 hedge funds’ portfolios at the end of the fourth quarter of 2018. There were 2 hedge funds in our database with ACH positions at the end of the previous quarter. Our calculations also showed that ach isn’t among the 30 most popular stocks among hedge funds.

According to most shareholders, hedge funds are viewed as slow, old financial tools of years past. While there are greater than 8000 funds trading at present, We choose to focus on the upper echelon of this club, about 750 funds. These hedge fund managers shepherd most of the smart money’s total capital, and by watching their first-class investments, Insider Monkey has determined various investment strategies that have historically outperformed the S&P 500 index. Insider Monkey’s flagship hedge fund strategy outstripped the S&P 500 index by nearly 5 percentage points per annum since its inception in May 2014 through early November 2018. We were able to generate large returns even by identifying short candidates. Our portfolio of short stocks lost 27.5% since February 2017 (through March 12th) even though the market was up nearly 25% during the same period. We just shared a list of 6 short targets in our latest quarterly update and they are already down an average of 6% in less than a month.

What have hedge funds been doing with Aluminum Corp. of China Limited (NYSE:ACH)? 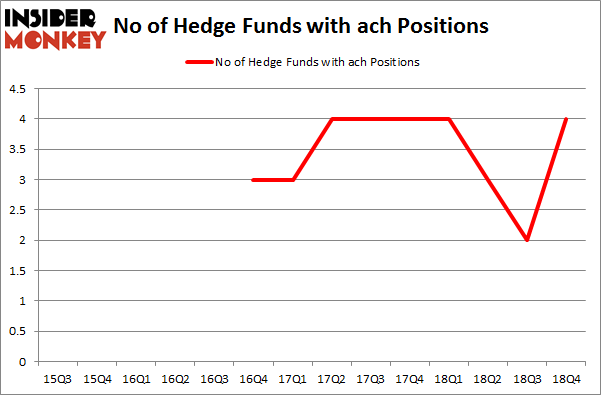 According to Insider Monkey’s hedge fund database, Renaissance Technologies, managed by Jim Simons, holds the number one position in Aluminum Corp. of China Limited (NYSE:ACH). Renaissance Technologies has a $4 million position in the stock, comprising less than 0.1%% of its 13F portfolio. Sitting at the No. 2 spot is AQR Capital Management, managed by Cliff Asness, which holds a $0.3 million position; less than 0.1%% of its 13F portfolio is allocated to the stock. Remaining hedge funds and institutional investors with similar optimism contain Israel Englander’s Millennium Management, Matthew Hulsizer’s PEAK6 Capital Management and .

As industrywide interest jumped, some big names have jumped into Aluminum Corp. of China Limited (NYSE:ACH) headfirst. Millennium Management, managed by Israel Englander, created the biggest position in Aluminum Corp. of China Limited (NYSE:ACH). Millennium Management had $0.2 million invested in the company at the end of the quarter. Matthew Hulsizer’s PEAK6 Capital Management also initiated a $0 million position during the quarter.

Let’s check out hedge fund activity in other stocks – not necessarily in the same industry as Aluminum Corp. of China Limited (NYSE:ACH) but similarly valued. We will take a look at Bruker Corporation (NASDAQ:BRKR), Brookfield Renewable Partners L.P. (NYSE:BEP), Itaú CorpBanca (NYSE:ITCB), and Compania Cervecerias Unidas S.A. (NYSE:CCU). All of these stocks’ market caps are closest to ACH’s market cap.

As you can see these stocks had an average of 9.75 hedge funds with bullish positions and the average amount invested in these stocks was $104 million. That figure was $5 million in ACH’s case. Bruker Corporation (NASDAQ:BRKR) is the most popular stock in this table. On the other hand Itaú CorpBanca (NYSE:ITCB) is the least popular one with only 1 bullish hedge fund positions. Aluminum Corp. of China Limited (NYSE:ACH) is not the least popular stock in this group but hedge fund interest is still below average. Our calculations showed that top 15 most popular stocks among hedge funds returned 21.3% through April 8th and outperformed the S&P 500 ETF (SPY) by more than 5 percentage points. Hedge funds were also right about betting on ACH as the stock returned 38.6% and outperformed the market as well.