After several tireless days we have finished crunching the numbers from the more than 700 13F filings issued by the elite hedge funds and other investment firms that we track at Insider Monkey, which disclosed those firms’ equity portfolios as of September 30. The results of that effort will be put on display in this article, as we share valuable insight into the smart money sentiment towards Alliant Energy Corporation (NYSE:LNT).

Alliant Energy Corporation (NYSE:LNT) has seen an increase in support from the world’s most elite money managers lately. Our calculations also showed that LNT isn’t among the 30 most popular stocks among hedge funds.

What have hedge funds been doing with Alliant Energy Corporation (NYSE:LNT)?

At Q3’s end, a total of 20 of the hedge funds tracked by Insider Monkey held long positions in this stock, a change of 25% from one quarter earlier. The graph below displays the number of hedge funds with bullish position in LNT over the last 13 quarters. With the smart money’s sentiment swirling, there exists a few noteworthy hedge fund managers who were adding to their holdings substantially (or already accumulated large positions). 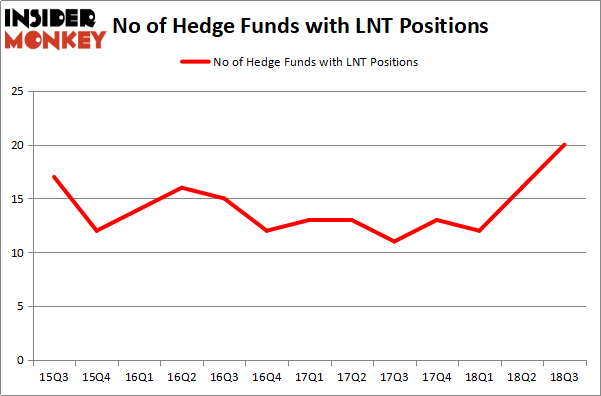 Of the funds tracked by Insider Monkey, Citadel Investment Group, managed by Ken Griffin, holds the biggest position in Alliant Energy Corporation (NYSE:LNT). Citadel Investment Group has a $110.6 million position in the stock, comprising less than 0.1%% of its 13F portfolio. The second most bullish fund manager is Renaissance Technologies, led by Jim Simons, holding a $75.3 million position; 0.1% of its 13F portfolio is allocated to the stock. Some other professional money managers that are bullish include Israel Englander’s Millennium Management, Brian Olson, Baehyun Sung, and Jamie Waters’s Blackstart Capital and Sara Nainzadeh’s Centenus Global Management.

As you can see these stocks had an average of 19 hedge funds with bullish positions and the average amount invested in these stocks was $369 million. That figure was $328 million in LNT’s case. Cabot Oil & Gas Corporation (NYSE:COG) is the most popular stock in this table. On the other hand Huaneng Power International Inc (NYSE:HNP) is the least popular one with only 4 bullish hedge fund positions. Alliant Energy Corporation (NYSE:LNT) is not the most popular stock in this group but hedge fund interest is still above average. This is a slightly positive signal but we’d rather spend our time researching stocks that hedge funds are piling on. In this regard COG might be a better candidate to consider a long position.