We can judge whether NXP Semiconductors NV (NASDAQ:NXPI) is a good investment right now by following the lead of some of the best investors in the world and piggybacking their ideas. There’s no better way to get these firms’ immense resources and analytical capabilities working for us than to follow their lead into their best ideas. While not all of these picks will be winners, research shows that these picks historically outperformed the market when we factor in known risk factors.

After hitting a 3-year high in the middle of the year, hedge fund ownership of NXP Semiconductors NV (NASDAQ:NXPI) took a hit during Q3, as a net total of 15 hedge funds sold off the stock. Among them was Dan Loeb’s Third Point, which unloaded the massive position that it had just opened during Q2, which was valued at over $1.17 billion on June 30. The position appears to have been a disaster for Loeb, landing among his top 5 biggest losers of Q2 according to his fund’s investor letter for that quarter, and there was no relief to be found in Q3 before the stock was sold off, as shares continued to sink throughout the quarter. Despite numerous hedge funds bailing on NXPI, it still ranked among the 30 Most Popular Stocks Among Hedge Funds in Q3 of 2018, though falling outside of the top 20.

To most stock holders, hedge funds are viewed as slow, old financial vehicles of the past. While there are more than 8000 funds in operation at the moment, Our experts hone in on the masters of this club, around 700 funds. These investment experts administer the majority of the hedge fund industry’s total capital, and by keeping track of their matchless picks, Insider Monkey has unearthed numerous investment strategies that have historically outrun the broader indices. Insider Monkey’s flagship hedge fund strategy outpaced the S&P 500 index by 6 percentage points a year since its inception in May 2014 through early November 2018. We were able to generate large returns even by identifying short candidates. Our portfolio of short stocks lost 26.1% since February 2017 even though the market was up nearly 19% during the same period. We just shared a list of 11 short targets in our latest quarterly update. 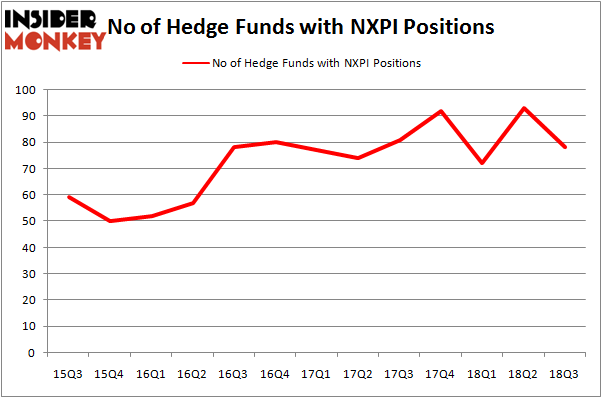 Among these funds, Pentwater Capital Management held the most valuable stake in NXP Semiconductors NV (NASDAQ:NXPI), which was worth $1.18 billion at the end of the third quarter. On the second spot was Elliott Management which amassed $897.8 million worth of shares. Moreover, D E Shaw, OZ Management, and Soroban Capital Partners were also bullish on NXP Semiconductors NV (NASDAQ:NXPI), allocating a large percentage of their portfolios to this stock.

Because NXP Semiconductors NV (NASDAQ:NXPI) has experienced bearish sentiment from the aggregate hedge fund industry, we can see that there lies a certain “tier” of hedge funds who sold off their full holdings last quarter. At the top of the heap, Dan Loeb’s Third Point dropped the largest investment of the 700 funds followed by Insider Monkey, worth about $1.17 billion in stock, and Josh Resnick’s Jericho Capital Asset Management was right behind this move, as the fund said goodbye to about $410.9 million worth. These transactions are intriguing to say the least, as total hedge fund interest was cut by 15 funds last quarter.

As you can see these stocks had an average of 19 hedge funds with bullish positions and the average amount invested in these stocks was $1.04 billion. That figure was $7.25 billion in NXPI’s case. Fortive Corporation (NYSE:FTV) is the most popular stock in this table. On the other hand BT Group plc (NYSE:BT) is the least popular one with only 6 bullish hedge fund positions. Compared to these stocks NXP Semiconductors NV (NASDAQ:NXPI) is more popular among hedge funds. Considering that hedge funds are fond of this stock in relation to its market cap peers, it may be a good idea to analyze it in detail and potentially include it in your portfolio.