We at Insider Monkey have gone over 700 13F filings that hedge funds and prominent investors are required to file by the SEC The 13F filings show the funds’ and investors’ portfolio positions as of December 31st. In this article, we look at what those funds think of New Relic Inc (NYSE:NEWR) based on that data.

Hedge fund interest in New Relic Inc (NYSE:NEWR) shares was flat at the end of last quarter. Overall hedge fund positions in the stock are still at their all time high. At the end of this article we will also compare NEWR to other stocks including ADT Inc. (NYSE:ADT), BRF S.A. (NYSE:BRFS), and Acuity Brands, Inc. (NYSE:AYI) to get a better sense of its popularity.

To most market participants, hedge funds are seen as unimportant, outdated financial vehicles of yesteryear. While there are greater than 8000 funds with their doors open at the moment, We look at the upper echelon of this club, around 750 funds. These investment experts watch over the lion’s share of all hedge funds’ total asset base, and by monitoring their finest investments, Insider Monkey has spotted various investment strategies that have historically outstripped Mr. Market. Insider Monkey’s flagship hedge fund strategy defeated the S&P 500 index by nearly 5 percentage points per annum since its inception in May 2014 through early November 2018. We were able to generate large returns even by identifying short candidates. Our portfolio of short stocks lost 27.5% since February 2017 (through March 12th) even though the market was up nearly 25% during the same period. We just shared a list of 6 short targets in our latest quarterly update and they are already down an average of 6% in less than a month.

What does the smart money think about New Relic Inc (NYSE:NEWR)? 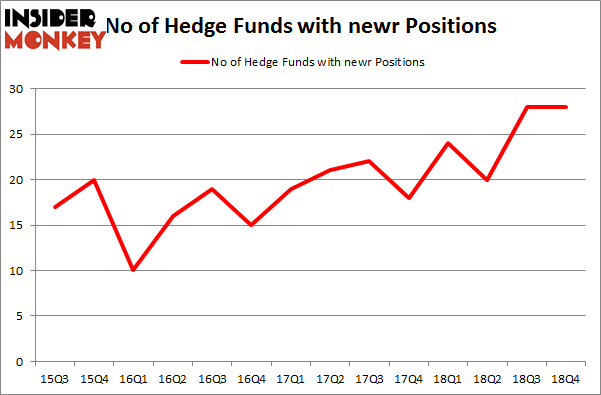 Among these funds, Renaissance Technologies held the most valuable stake in New Relic Inc (NYSE:NEWR), which was worth $92.9 million at the end of the third quarter. On the second spot was Two Sigma Advisors which amassed $75.2 million worth of shares. Moreover, Millennium Management, Matrix Capital Management, and Polar Capital were also bullish on New Relic Inc (NYSE:NEWR), allocating a large percentage of their portfolios to this stock.

Due to the fact that New Relic Inc (NYSE:NEWR) has experienced bearish sentiment from the smart money, it’s safe to say that there is a sect of money managers that elected to cut their entire stakes last quarter. Intriguingly, Peter Rathjens, Bruce Clarke and John Campbell’s Arrowstreet Capital dumped the largest stake of the “upper crust” of funds monitored by Insider Monkey, valued at an estimated $13.4 million in stock. Paul Tudor Jones’s fund, Tudor Investment Corp, also dropped its stock, about $2.4 million worth. These moves are important to note, as total hedge fund interest stayed the same (this is a bearish signal in our experience).

As you can see these stocks had an average of 18.5 hedge funds with bullish positions and the average amount invested in these stocks was $295 million. That figure was $446 million in NEWR’s case. Acuity Brands, Inc. (NYSE:AYI) is the most popular stock in this table. On the other hand BRF S.A. (NYSE:BRFS) is the least popular one with only 9 bullish hedge fund positions. Compared to these stocks New Relic Inc (NYSE:NEWR) is more popular among hedge funds. Our calculations showed that the top 15 most popular stocks among hedge funds returned 21.3% year-to-date through April 8th and outperformed the S&P 500 ETF (SPY) by more than 5 percentage points. Hedge funds were also right about betting on NEWR, though not to the same extent, as the stock returned 18.7% and outperformed the market as well.