Insider Monkey finished processing more than 700 13F filings made by hedge funds and prominent investors. These filings show these funds’ portfolio positions as of June 30. What do these smart investors think about Johnson & Johnson (NYSE:JNJ)?

Overall, they’re fairly bullish on the stock, as 10.2% of the hedge funds tracked by Insider Monkey’s custom database owned JNJ shares on June 30. However, that figure is down from 11.3% at the end of Q3 2017, as several major funds and healthcare investors have sold off the stock, including Dmitry Balyasny’s Balyasny Asset Management. Johnson & Johnson did rank highly on the list of Billionaire Ken Fisher’s Top Stock Picks Heading Into 2019, as Fisher Investments held $1.56 billion in JNJ shares on September 30. However, it was the only stock found among Fisher Investments’ top 20 stock picks that the firm sold shares of during the September quarter.

In today’s marketplace there are tons of metrics market participants have at their disposal to size up their stock investments. A pair of the less known metrics are hedge fund and insider trading interest. Our researchers have shown that, historically, those who follow the best picks of the elite money managers can outperform the broader indices by a solid margin (see the details here). 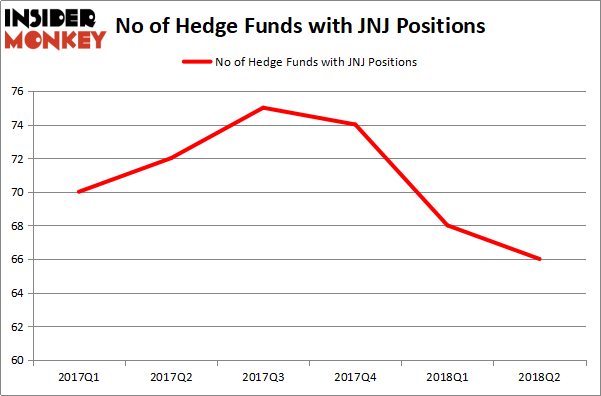 Judging by the fact that Johnson & Johnson (NYSE:JNJ) has witnessed falling interest from hedge fund managers, logic holds that there exists a select few hedgies who were dropping their positions entirely last quarter. It’s worth mentioning that Clint Carlson’s Carlson Capital dumped the biggest investment of the 700 funds watched by Insider Monkey, totaling an estimated $18.3 million in stock, and Malcolm Fairbairn’s Ascend Capital was right behind this move, as the fund sold off about $12.8 million worth. These moves are important to note, as aggregate hedge fund interest dropped by 2 funds last quarter.

As you can see these stocks had an average of 83 hedge funds with bullish positions and the average amount invested in these stocks was $18.53 billion. That figure was $5.71 billion in JNJ’s case. Visa Inc (NYSE:V) is the most popular stock in this table. On the other hand Royal Dutch Shell plc (ADR) (NYSE:RDS) is the least popular one with only 39 bullish hedge fund positions. Johnson & Johnson (NYSE:JNJ) is not the least popular stock in this group but hedge fund interest is still below average and trending down. This is a slightly negative signal and we’d rather spend our time researching stocks that hedge funds are piling on. In this regard V might be a better candidate to consider a long position.